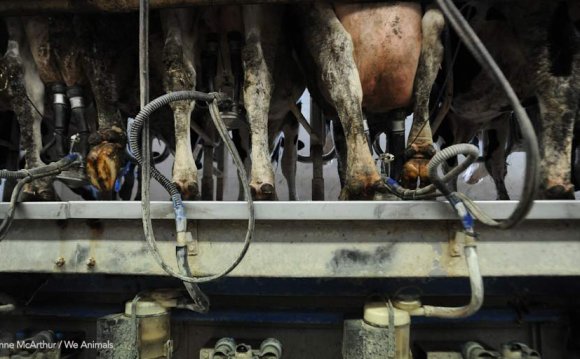 Northeast Wisconsin is in the grip of major agricultural changes. Farmland is being lost to urban sprawl. Farm economic conditions are forcing farm families off the land. Wisconsin’s family farms are being replaced by huge industrial operations housing thousands of animals. These factory farms, often referred to as concentrated animal feeding operations (CAFOs), house thousands of cows, chickens, hogs, or turkeys.

According to Midwest Environmental Advocates, smaller dairy farms in Wisconsin (those with 20-99 milk cows) decreased 28% between 1992 and 1997 and the Wisconsin Research Policy Institute reported that Wisconsin lost 7, 000 dairy farms between 1995 and 2000. Today, the rate of loss may be equivalent to three family farms each day, higher than any other state. Conversely, since 1992 the number of CAFOs increased dramatically, especially for dairy cows. The Wisconsin Department of Natural Resources reported that in 1995 there were less than 10 CAFOs in the state, but by 2012 there were 214 statewide with 99 in northeast Wisconsin.

The huge scale of these factory farms is out of proportion to the rural areas where they are sited, and they degrade the quality of life in these communities. Local communities can do little to regulate these farm factories. In 2004, Wisconsin enacted the Livestock Facility Siting Law to provide uniform regulation of livestock facilities at the state level, thereby limiting local control.

Huge amounts of animal waste are produced at factory farms. Operators collect, store, and then spread millions of gallons of liquid waste to land throughout their county and neighboring counties. Kewaunee County alone has an estimated 80, 000 cows producing an equivalent amount of waste equal to 1.6 million humans. Unlike human waste, which most often goes to sewage treatment facilities, this animal waste is spread, untreated in amounts greater than what the land can support. The state is lax in enforcing manure management plans, resulting in nearby streams and lakes being damaged by excess nutrients, chemicals, bacteria, viruses, and pharmaceuticals flowing into them. Of the total amount of phosphorus entering Green Bay, nearly half of it is from agricultural sources.

Groundwater is also being impacted by this excess spreading of animal waste. In many areas of Door, Brown, and Kewaunee Counties, a limited amount of topsoil, often less than 18 inches, sits on karst topography. This fractured bedrock allows contaminated water to easily flow to drinking water aquifers, posing a serious threat to human health.

Factory farms are already impacting human health by polluting drinking water. While not all well contamination comes from factory farms, areas with the greatest number of polluted wells also have the greatest concentration of animals. In Kewaunee County, where over 40% of the total land area has liquid manure being spread, 31% of the private wells tested are contaminated with nitrates or bacteria.

Human health is also impacted when manure is applied to fields with spray irrigation equipment (center pivot or traveling gun). . Not only does this pose a considerable nuisance to those who live downwind from the application site, it also can contribute to health problems in young children, the elderly and those already afflicted with asthma. “Using center pivots to dispose of raw, untreated liquid manure is a reckless and dangerous practice, ” states Margaret L Pulera, MD.

Neighbors who live near factory farms often suffer nauseating levels of manure smells. In fact, high odor concentrations (chemical gases) are unhealthy, not just annoying. Four main gases are produced from decomposing manure: hydrogen sulfide, methane, ammonia and carbon dioxide. According to the Farm Safety Association, in high concentrations each of these gases may pose a health threat to humans and livestock. The nuisance odor associated with liquid manure comes primarily from hydrogen sulfide’s distinct rotten egg smell. At low concentrations, this gas can irritate the eyes and the respiratory tract, while moderate levels can cause headache, nausea and dizziness.

Neighbors who moved to the country for fresh air and quiet find that their personal dreams are destroyed, and yet they can't afford to move away because their home value has plummeted due to the nearby factory farm. No one will buy their home at its previous value.

The huge agribusinesses who operate the factory farms can take advantage of many government subsidies that are out of reach for smaller, poorer operators. Industrial farming is distorting the farm economy, forcing many small family farms out of business. The agricultural economy is quickly becoming concentrated in far fewer hands, destroying the American ideal of the independent farm family on which this country was founded. Factory farms rarely benefit anyone other than the operators and a few corporate investors and they discourage diversified economic investment.