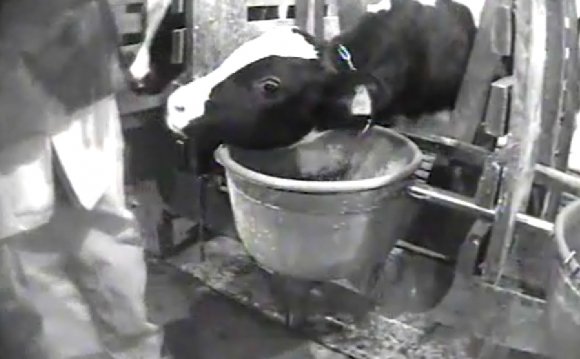 Life of a Pig on a Factory Farm

Approximately 100 million pigs are raised and slaughtered in the U.S. every year. As babies, they are subjected to painful mutilations without anesthesia or pain relievers: Notches are taken out of the piglets’ ears for identification, and their tails are cut off to minimize tail biting, a behavior that occurs when pigs are kept in deprived factory farm environments.

By two to three weeks of age, 15% of the piglets will have died. Those who survive are taken away from their mothers and crowded into metal-barred and concrete-floored pens in giant warehouses. Pigs live in these pens until they reach a slaughter weight of 250 pounds, usually at 6 months of age.

In the U.S. Pork Industry, more than 6 million pigs are used each year for breeding. Breeding sows are treated like piglet-making machines, living a continuous cycle of impregnation and birth, each sow being forced to produce more than 20 piglets a year. During their pregnancies, sows are kept in two-foot wide gestation crates, intended to allow pigs only enough movement necessary to stand up and lie down. Click here to learn more about the future of gestation crates.

At the end of their four-month pregnancies, the sows are moved into farrowing crates, where they spend about a month until their piglets are weaned. After the sows nurse their young for two to three weeks, the piglets are taken away to be fattened, and the sows are re-impregnated and returned to the gestation crates. This cycle continues for the pig’s entire life, about 3 to five years.

The type of housing system used throughout the U.S. to encourage this continuous grueling cycle of breeding sows is gestation crate to farrowing crate to gestation crate. It was developed to allow for economically efficient pork production, requiring less labor and feed than other housing arrangements.

Researchers have found outdoor, crate-free systems and loose housing systems are better for sow health and longevity. In typical U.S. factory farms, however, 100 or more sows per warehouse are kept in gestation crates placed side by side in rows of often more than 20 sows.

This overcrowding and confinement is unnatural since pigs are actually very clean animals. If they are given sufficient space, pigs are careful not to soil the areas where they sleep or eat. But in factory farms, they are forced to live in unsanitary conditions – in their own feces, urine, vomit and the corpses of other pigs.

Scientific evidence suggests that intensive confinement causes physical disorders in sows. Unnatural flooring and lack of exercise leads to obesity and crippling leg disorders. Further, the air in pig factories is laden with dust, dander, and noxious gases, which are produced as the pigs urine and feces builds up inside the warehouses, causing respiratory difficulties and the spreading of infectious diseases amongst the pigs.

Scientific evidence also suggests that intensive confinement causes psychological disorders in sows. The lack of environmental stimulation in the stall environment and the sows’ inability to perform normal behaviors including rooting, foraging, nest-building, grazing, wallowing, or practicing social behaviors, leads to psychological disorders including chronic stress, depression, aggression, and abnormal and neurotic coping behaviors, such as bar biting and sham chewing (chewing nothing).