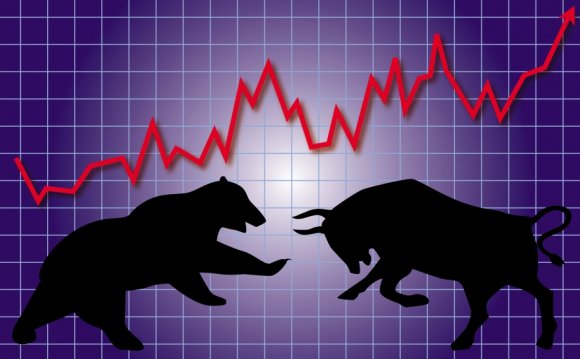 The finance world famously has almost a language all of its own, ranging from complex financial jargon to the playful slang of the stock market. What that means is that within the thicket of terms like VaR, backwardation, contango, tranche, and junk bond, we find some familiar animal friends — although often in some strange contexts.

The bulls and bears

When it comes to the wildlife of Wall Street, two animals should immediately come to mind: bulls and bears. With the bear standing in for a downward-trending market and the bull in for an upward-trending one, these two have stood in opposition to one another since the 18th century.

The Oxford English Dictionary (OED) frames this financial use of bear as preceding that of bull, suggesting that this use of “bear” probably extends from the idiom “to sell the bear’s skin before one has caught the bear.” These bearskin traders (or jobbers, as they were known) often sold their wares before actually receiving them, and would hope for a downturn in the market so that they might make a larger profit on the transaction.

On the other end of the market, the emergence of the bull – a businessperson in favor of an upward-trending market – in opposition to the bear is unclear. Some suggest that the term was drawn from the practice of bull- and bear-baiting, or even from the fighting styles of the two animals (a bear swipes down with its paws where a bull thrusts upwards with its horns).

So while bear and bull originally referred to the actual speculators, bear market and bull market came to refer to the market conditions favorable to those investors, though they did not appear until the late 19th century. Other derivatives include bear raid – when investors try to profit on the falling price of a stock, or cause the fall to happen – and bear squeeze – the financial pressure experienced by bear speculators when the market rises.

The term lame duck is more commonly associated with politics today, referring to politicians still in office following the election of their successor. Despite those present-day political leanings, the term was used earlier (like bulls and bears) in 18th-century British finance.

In the context of the business world the term refers to someone who has defaulted on debts or entered bankruptcy. Ineffective traders would have been branded as “lame ducks, ” ostensibly for the way in which they “waddle” out of the stock exchange. Today, the financial use of the term is considered dated.

More common in the UK, a stag profit or stagging – known as in the US — is when an individual or group buys into a company’s initial public offering (IPO) or issue of new shares with the intent of selling right away, hoping to take advantage of the rising stock price. The traders who participate in this practice are known as stags.

While the term is of uncertain origin, it seems possible that the term emerged from the sense of stag as an informant, especially in the phrase to turn stag. As the citation of Francis Grose’s 1785 edition of A Classical Dictionary of the Vulgar Tongue puts it, a stag is a “rogue who impeaches his confederates.” The term may have emerged from this sense of those “stag” traders turning on the other investors in order to make that quick profit.

An alarming one for pet-lovers out there, a dead cat bounce is stock market slang for the temporary upswing in stock prices after a sharp fall. The rather unfortunate and very literal meaning of the phrase is helpfully explained in one of the OED citations via the Washington Post: “If you throw a dead cat against a wall at a high rate of speed, it will bounce – but it is still dead.”

In the stock market, the brief upwards movement of the dead cat bounce is usually the result of speculators buying at the low prices and then quickly reselling. The phrase has also come to mean any kind of brief improvement or artificial success.

The wolves (of Wall Street)

While wolf alone has not yet gained traction as financial slang in its own right, the animal (and its wider figurative use to refer to ‘a rapacious, ferocious, or voracious person or thing’) has been used several times to allude to powerful (and sometimes criminal) individuals on Wall Street. The most memorable recent “Wolf” is Jordan Belfort, convicted on charges of stock fraud in connection to his boiler room penny stock operation and stock market manipulation. Belfort’s crimes and his lavish lifestyle were depicted in Martin Scorsese’s 2013 film The Wolf of Wall Street.

While Belfort was the self-proclaimed “wolf of Wall Street, ” he was not the first “wolf” that the finance world had known. Besides Belfort, there was also the con man David Lamar, convicted on charges of impersonating a member of Congress in 1913, and the anti-hero of the 1929 film The Wolf of Wall Street, which starred George Bancroft as a trader who corners the copper market.

The opinions and other information contained in OxfordWords blog posts and comments do not necessarily reflect the opinions or positions of Oxford University Press.