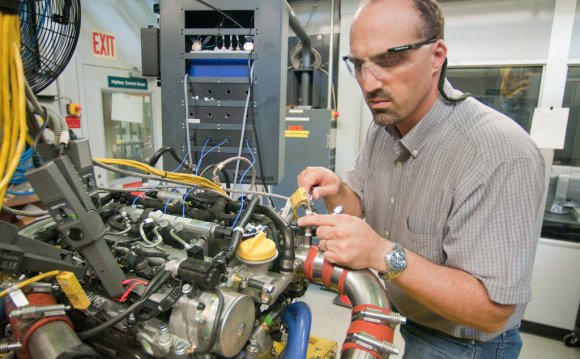 Transonic Combustion, a startup based in Camarillo, CA, has developed a fuel-injection system it says can improve the efficiency of gasoline engines by more than 50 percent. A test vehicle equipped with the technology gets 64 miles per gallon in highway driving, which is far better than more costly gas-electric hybrids, such as the Prius, which gets 48 miles per gallon on the highway.

Efficient exotic: Transonic Combustion put its new fuel-injection technology into this sports car, which weighs about as much as a Toyota Prius hybrid and has similar aerodynamics. It’s not a hybrid, but it gets better gas mileage than a Prius.

The key is heating and pressurizing gasoline before injecting it into the combustion chamber, says Mike Rocke, Transonic’s vice president of business development. This puts it into a supercritical state that allows for very fast and clean combustion, which in turn decreases the amount of fuel needed to propel a vehicle. The company also treats the gasoline with a catalyst that “activates” it, partially oxidizing it to enhance combustion.

The technology is one of many being developed to squeeze more efficiency out of existing engines to meet new fuel economy standards and other regulations–without making vehicles more expensive. “It’s a time of renaissance for internal combustion engines, ” says William Green, a professor of chemical engineering at MIT. Improvements include smaller engines boosted with turbocharging, improved valve timing, and direct injection, in which fuel is injected directly into the combustion chamber rather than into an adjacent port. He says Transonic’s approach “may be a promising way to improve on conventional direct injection. Several companies and university research groups are currently pursuing a variety of non-conventional direct-injection engine concepts, and some have published engine data which look very promising.”

If it works as promised, the new technology would improve fuel economy by far more than these other options, some of which can improve efficiency on the order of 20 percent. It is expected to cost about as much as high-end fuel injection systems currently on the market, Rocke says.

Once the fuel is injected into the piston, the heat and pressure are enough to cause the fuel to combust without a spark (similar to what happens in diesel engines), which also helps provide fast, uniform combustion. Ignition can be timed to happen just when the piston is reaching the optimal point, so it can convert as much of the energy in the gasoline into mechanical movement as possible, without wasting energy by heating up the combustion chamber walls, as happens in conventional technologies. The company has developed proprietary software that lets the system adjust the injection precisely depending on the load put on the engine.

The system can also reduce something called “throttling losses.” Ordinarily, the air intake to an engine is partially closed during cruising, and this makes the engine work harder. Transonic’s system can operate with the air intake open, creating a lean mixture in the combustion chamber (with a lot of air, but just a little gasoline). Rocke says that at a steady cruising speed of 50 miles per hour, the test car gets 98 miles per gallon.

The company has demonstrated the technology in its own test engine, and says it is currently testing it with three automakers. One key question is the impact the high pressures and temperatures will have on how long the engine lasts, Rocke says. The company, which is supported by venture-capital investments from Venrock and Khosla Ventures, plans to manufacture its system itself, rather than licensing the technology. It plans to build its first factory in 2013, and to introduce the technology into production cars by 2014.