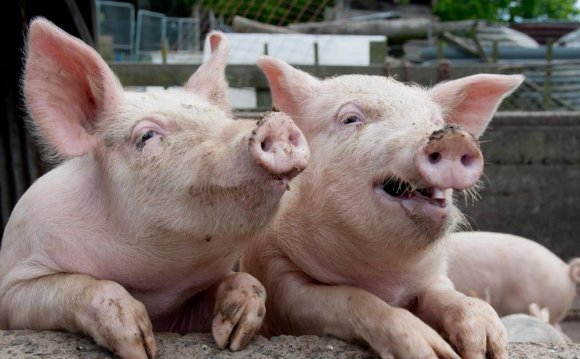 Understand this: The vast majority of farms are operated just like the family farm that I live and work on. We have many videos about how our operation works on our YouTube Channel and we hope that this can give you an idea of what a typical family farm actually looks like!

These family farms are not the family farms from fifty years ago, however. Higher land prices and higher input costs have made it extremely tough to make much of a profit as a farmer, especially on a small farm. Few farming opportunities and the draw of a higher salary in the city have also led to a decline of young people returning to their family’s farm. These factors contributed to a decline in the number of farms and the growth of the average size of a typical family farm. Many family farms joined together to farm “corporately” (Our father and grandfather farmed together as a corporation, as will the Peterson Farm Bros) to help absorb the massive costs of running a modern day farm. So, as you can see, “corporate farms” can be family farms at the same time, and corporate farming can actually encourage family farming! There are true corporate farms that operate as a large business, but they are not nearly as common as family farms. Don’t believe me? Come out here to the Midwest and try to find a corporate farmer!

New technology such as larger equipment, GPS, and automated processes have allowed for farmers to farm more acres and raise more livestock per farmer, which has allowed agricultural production to thrive in recent years. Many family farms have thousands of acres of land and over a thousand head of livestock, including ours.

An “industrial farm” or “factory farm” is considered a large-scale farming operation with over 1, 000 acres of ground or over 1, 000 head of livestock (otherwise known as a Concentrated Animal Feeding Operation). This definition fits our family farm and many others I know of. These bigger farms have allowed for greater food production on less land. In 1960, one farmer fed just 25 people. Today, the average family farmer feeds over 155 people and the average American spends only about 6% of their income on their food, compared to 17% in 1960. Less expensive food has allowed for 98% of the population to spend all of their time doing something else besides raising their own food. How would you like it if you spent each day of your life growing your own food, instead of working at your current job and spending loads of time and money on family, leisure, and entertainment?

Fact: The “industrial, corporate, factory” farming everyone seems to be so against is actually taking place on family farms just like ours! However, please hear me out! Just because farms these days are big, do not mean they are unethical, only concerned about money, or rich and spoiled. In fact, many large family farms still have trouble making a profit. Droughts, floods, blizzards, market prices, and equipment breakdowns can wipe away all of our profit in an instant. Farmers, no matter how big or small, still have to work crazy long hours, still have to get their clothes dirty, and still have to deal with the defeat and sadness of losing a crop or losing an animal to sickness. It’s not an easy job. And that is why farmers use these methods and new technology, to make their job a little easier!

I firmly believe there is no better place to raise a child than on a farm, big or small. I was outside helping my dad feed cattle before I went to preschool. I learned to drive a tractor when I was 5. I put in my first 10-hour workday when I was in fifth grade. And I loved every minute of it! The farming community that I have experienced in my travels throughout the country is one represented by strong ethical values, hard work ethic, and legendary perseverance no matter what the size, type, or location. If you’ve met a farmer that doesn’t exhibit these qualities, I would be extremely surprised!

Our farm is a 5th generation farm that started out with just a few acres and just a few animals. Nearly everyone in this country was a farmer back then, and so not as much food needed to be produced. It was also a lot easier to make a profit. Today, farmers make up less than 2 percent of the population, meaning farms have had to grow to keep up with food demand. Our farm, as I mentioned is pretty big! But of course, you can see in the videos that we are as “family farm” as you can get! My dad, my brothers, and I operate our farm, with occasional help from our cousin Terry and our mom and sister. All family! And of the thousands upon thousands of Midwest farms, the majority of them look essentially like ours. So, here is the big takeaway: If you are going to hate on “big, modern day agriculture” and “large farms, ” just know that the majority of the farms you are hating on are down to earth, Midwest families just like ours who are just trying to work hard to make a living!