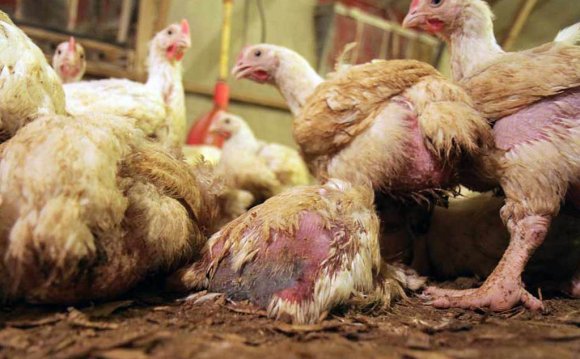 In 2013, a COK undercover investigator worked inside Hargin, Inc., a turkey breeding factory farm in Pope County, Minnesota, the top turkey-producing state in the US. At Hargin, an estimated 25, 000 female turkeys are locked inside massive sheds, forced to live in cruel and filthy conditions.

Turkeys raised on factory farms are bred to grow obese so quickly, they can no longer mate naturally. Instead, they’re artificially inseminated – as shown in our video, this is a violent and frightening process that involves grabbing hens by their legs, shackling them upside down, and using a plastic tube to inseminate them.

These hens will spend their lives being artificially inseminated over and over again to continually lay eggs that will hatch young turkeys to be raised and slaughtered for food, including Thanksgiving dinners.

At Hargin, metal and plastic nesting machines are used to collect eggs, and our video shows hens getting entangled in the dilapidated and poorly maintained equipment. In an effort to free themselves, birds who get stuck by their wings, head, or feet, often endure severe injuries — sometimes so severe they’re unable to survive.

To make matters worse, the squalid, cramped conditions cause many hens to suffer from various ailments, such as severe irritations covering their heads and faces. As is standard in the industry, sick and injured birds are typically left to suffer without veterinary care.

Turkeys and the Turkey Industry

Turkeys are smart, social and inquisitive birds with unique personalities. They’re devoted mothers who, given the opportunity, are inseparable from their babies. At breeding factories like Hargin, however, these hens will never get a chance to even see their young. Read more.

Sadly, during the holiday season alone, more than 45 million turkeys will be killed for their meat. Treated as little more than mere meat-producing machines from the moment they hatch, the vast majority of these intelligent birds spend their entire lives intensively confined inside massive sheds and will never set foot outside. Unfortunately for these birds, there are no federal laws in the United States protecting turkeys (or other birds raised for food) from such cruelty.

You Can Make a Difference: