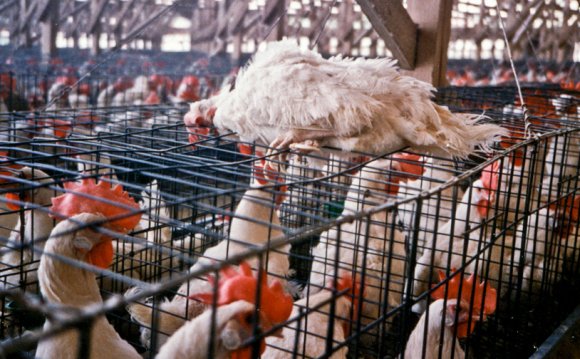 Humanitarian or Eco-Terrorist – this is the question many in legislature are being faced with. There has been a battle between animal rights activists and the practice of factory farming for years. But only recently has legislature begun to fight back. The Factoring Farming industry is a booming and burgeoning business in the United States. Nearly a third of the US population worked in food production and farming a century ago; but as the country transitions from our agrarian past to the genetically modified, mass-produced age of food ‘production’, that figure has dropped to nearly one percent. On Inside Secret America: Animal Undercover investigative journalists Mariana Van Zeller and Darren Foster dive head first into the debate of Factory Farming. They will take a look into the secret world of factory farming and the undercover investigators who are fighting the industry as well as the legislation that’s vying to protect it.

On Prather Ranch, a certified humane cattle ranch in California that prides itself on open pastures and low-stress handling of animals, Mariana and Darren learn about traditional farming methods. A far cry from the factory farm model that is currently leading the industry, Prather Ranch is the exception, not the rule in modern agriculture.

Factory Farming is a much different model. Not to geek out on anyone who reads this, but the definition according to Merriam-Webster’s dictionary for Factory Farming is, “a large industrialized farm; especially: a farm on which large numbers of livestock are raised indoors in conditions intended to maximize production at minimal cost.”

Aside from the already inhumane environment that the factory farming model is built upon, many animal activists are concerned with the grueling amount of additional abuse these animals endure while exposed to such environments. Mariana and Darren meet animal rights activists like “Pete” who volunteer as undercover investigators in these Factory Farms around the country; in order to accrue footage of such instances of abuse on film to be used in criminal cases. This sort of animal rights investigative work faces criminal charges of its own as new legislation, known as Ag-Gag laws, makes undercover filming of businesses that involve animals punishable by law.

Agriculture activists would argue that this system of factory farming is ultimately better for the consumer; Factory Farming eliminates the concern of food safety and knowing where our food comes from as well as making it more readily available to a larger amount of people. It is believed by many in the Animal Agricultural Alliance that agriculture, just like any other field of science, evolves and is ultimately better using new technologies that can ‘enhance the system.’ Kay Johnson Smith, president of the Animal Agricultural Alliance pictured above, asserts that her primary objective is to protect America’s farming families that are under the strong criticisms of animal rights groups.

On the other hand, there is an iron curtain that surrounds industrial farming that the government and agricultural advocates seem intent on keeping tightly closed. Go undercover with Mariana and Darren on Inside Secret America: Animal Undercover tonight WED JUL 31 10PM ET on

Make it Possible - how to end factory farming