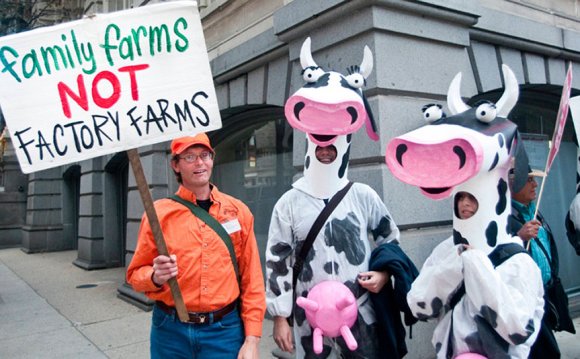 Factory farming had a definite beginning. Let's take a look at the growth of CAFOs, concentrated animal feeding operations, and see how it correlates with the growth of fast food.

The rise of the Animal Factory

Factory farming started with chickens and first appeared on the scene in 1926. It wasn't by design but rather the result of an over delivery of 450 chicks to a small farm on the Delmarva Peninsula.

Instead of returning the overage, the farmer/housewife decided to keep them indoors through the winter. The chicks survived and almost ten years later, she had increased her flock to 250, 000. Although this was chicken feed by today’s standards, the seeds of chicken factories had been planted.

It wasn't until the early 1970's that the first giant animal factories appeared and they were for egg production.

In California, a farm began keeping 3 million hens in one locale although the entire flock had to be destroyed due to rampant disease from keeping so many chickens so closely confined.

That was just a minor setback and by the early 2000's, some 62 companies were keeping over 1 million or more hens and Cal-Maine had 20 million chickens, the largest by far.

Two landmark books detailing the rise of the CAFO system and its effects on the environment, health, community and animals are shown above and below. Click on the book covers to look them over and hopefully buy. They are both an education and will open ones eyes as never before.

The King of Pork

Hog CAFOs can be traced back to Wendell Murphy, a North Carolina state senator. Prior to becoming a senator, he was a pig farmer and decided to mimic what the chicken industry had done.

Throughout the '80s and '90s, Murphy's company contracted with farmers to construct massive pig sheds on their property and raise pigs for him.

In effect, he transformed small independent hog farmers into sharecroppers, raising more pigs than ever before but only getting a small return for each pig.

As a senator, Murphy had laws passed that were favorable to large scale factory farming and soon he was the king of pork, literally.

The trend continued across all lines of food production with the predictable results. According to Eric Marcus's book, Meat Market, between 1950 and 1980, the number of U.S. farms with dairy cows fell from 3.65 million to 278, 000.

The rise of CAFOs has wrought enormous hardship and anguish on small family farmers across the U.S. to the extent that American farmers are four times more likely to commit suicide than the general population. As Earl Butz said, "Get big or get out".

The same scenario is seen with beef production where the industry has consolidated into two segments; one raises the cattle to slaughter weight and the other is centered on killing and butchering.

Just as happened with small pig, chicken and dairy farmers, throughout the 70's, livestock farmers have also had their livelihoods destroyed by larger and larger consolidated feedlots and packinghouses owned by mega-corporations.

A number of developments in the mid-70's vastly increased the efficiency of factory farming and reduced operating costs.

Massive uses of antibiotics have allowed the crowding of more and more animals into less and less space. It was also discovered that low dosage antibiotics caused the animals to grow faster thus the use of antibiotics for non-therapeutic uses skyrocketed.

During this same time period, the animals themselves were transformed through genetic engineering into living production machines.

The National Catholic Reporter did a piece on factory farms during the Advent season of 2010. Several years later the conditions described by Bruce Friedrich have changed very little, in fact have gotten worse.

Mr. Friedrich is the Vice President of Policy and Government Affairs for PETA and his article, Advent and Factory Farms brings a new perspective to the picture, namely Dr. Andrew Linzey's "Christianity and the Rights of Animals".

Keep that in mind as we continue looking at the plight of animals in the world of the CAFO (confined animal feeding operation).

A newborn piglet weighs in at about 2 pounds but in six months it is hitting the scales at 260 pounds; much more than 6-month old pigs weighed 50 years ago.

Chickens now reach slaughter weight in about 47 days compared to 70 days a few decades ago and they are 67% heavier than 1950 vintage birds.

The Cruelest of All Factory Farm Products: Eggs From Caged ...