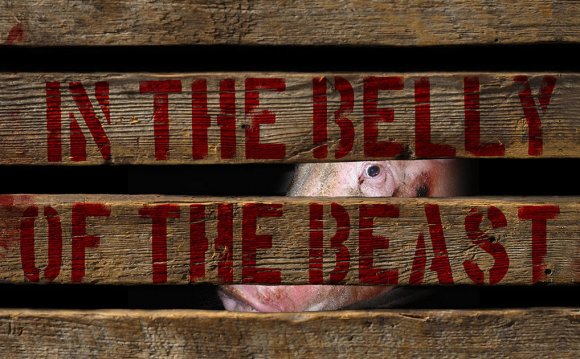 CAFO, or the Concentrated Animal Feeding Operation, also known as a factory farm, is the natural result of the sheer volume of animal products we consume today.

Mahatma Ghandi is widely quoted as saying "The greatness of a nation and its moral progress can be judged by the ways its animals are treated." Keep this in mind as you go through the following material about factory farms.

Obviously factory farming is big, big business and the sheer demand of the marketplace requires huge economies of scale which can only be met by a concentrated feeding operation, or so says the industry. The business of turning corn into animal flesh is dominated by a very small group of very rich, powerful multinational corporations.

It's no mystery who they are, just walk down the meat and dairy aisles of your local supermarket and read the labels. The mystery, however, is just who owns what. On the surface it appears that there are many different companies but the reality is that most of those supermarket brands are owned by just four or fewer corporations.

What is a CAFO?

A CAFO attempts to mimic the high volume assembly line production methods of manufactured goods, only with live animals. The key word in CAFO is "concentrated".

The objective is to place as many animals or birds as possible into as small a space as possible. Everything is geared toward getting them to market weight in the least amount of time or, in the case of layer hens or dairy cows, to confine them and maximize their egg or milk production with the least amount of human labor.

Efficiency, speed and technology is what matters most. Limiting the movement and freedom of the animals reduces their energy consumption and thus makes more calories available for conversion to flesh.

In the next page on Animal Specific CAFOs we will take a tour through each one to see how different animals fare in the food chain that feeds us.

CAFOs depend on corn, soy or other grains that animals are not designed to eat in their natural habitat. The effects of this unnatural feeding on the animals has devastating effects on their health but that is of little concern as long as the end product meets the proper specifications and can create a profit.

By the way, the Google Search Box below is for our visitor convenience in locating specific information in this site. Just type your search keyword in the box and click on Search.

How Did CAFOs Spring into Existence?

The captive/concentrated animal factory system didn't just spring into existence. It is the result of 10, 000 years of human progress from nomadic hunters to hunter/gatherers to the domestication of plants and animals, allowing the establishment of more permanent settlements, then communities.

As more food became available, populations increased thus creating a demand for more food. This positive feedback loop continued until there were so many people that small farms run by single families could no longer keep up with demand nor could they get their produce, eggs and meat to the large consuming markets.

The advent of the automobile, refrigeration, food processing and preservation all combined to attract business entrepreneurs who envisioned large scale production of both plant and animal foods, far reaching distribution systems, and large centralized retailing of food.

The natural result of the convergence of technology, efficiency, speed and the huge demands of a growing worldwide population was the CAFO system for animal products and the monoculture approach to plant farming.

An alliance (some might say collusion) between corporate corn growers, food companies and the federal and local governments greatly accelerated and enabled the spread of CAFOs.

Cheap feed in the form of corn and later soy and other grains is what kept the price of the end products low and thus demanded ever increasing volumes of output to maintain profits in the face of ever declining profit margins. Today everything depends on corn, in fact everything is corn.