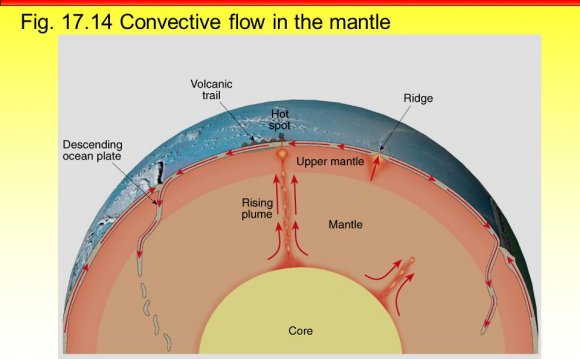 The Earth's internal heat source provides the energy for our dynamic planet, supplying it with the driving force for plate-tectonic motion, and for on-going catastrophic events such as earthquakes and volcanic eruptions. This internal heat energy was much greater in the early stages of the Earth than it is today, having accumulated rapidly by heat conversion associated with three separate processes, all of which were most intense during the first few hundred thousand years of the Earth's history: (1) extraterrestrial impacts, (2) gravitational contraction of the Earth's interior, and (3) the radioactive decay of unstable isotopes.

Most scientists believe that our solar system evolved from the accretion of solid particles derived from a large nebular cloud - the so-called Nebular Hypothesis. Under this scenario, proto-planet Earth would have grown over time from a barrage of extraterrestrial impacts, increasing its mass with each bombardment. As the proto-planet grew in size its increased gravitational field would have attracted even more objects its surface. The composition of these colliding bodies would have included metal-rich fragments (i.e.., iron meteorites), rocky fragments (i.e., stony meteorites), and icy fragments (i.e., comets). Although accretion was much more prevalent in the early stages of the Earth's history, these extraterrestrial collisions are still occurring today, exemplified by shooting stars and fireballs in the night sky, and by the occasional impact of larger bodies on the Earth's surface.

Such particles travel at great velocities, typically ~30, 000-50, 000 km/hr, similar to that of the Earth as it rotates around the Sun. The very large amount of kinetic energy inherent in these moving bodies is instantly converted to heat energy upon impact, thus providing a component to the Earth's internal heat source.

In the early stages of planetary accretion, the earth was much less compact than it is today. The accretionary process led to an increasingly greater gravitational attraction, forcing the Earth to contract into a smaller volume. Increased compaction resulted in the conversion of gravitational energy into heat energy, much like a bicycle pump heats up due to the compression of air inside it. Heat conducts very slowly through rock, so that the rapid build up of this heat source within the Earth was not accommodated by an equally rapid loss of heat through the surface.

Radioactive elements are inherently unstable, breaking down over time to more stable forms. The unstable isotope Uranium-238, for example, will slowly decay to Lead-206. All such radioactive decay processes release heat as a by product of the on-going reaction. In its early stages of formation, the young earth had a greater complement of radioactive elements, but many of these (e.g., aluminum-26) are short-lived and have decayed to near extinction. Others with a more lengthy rate of decay and are still undergoing this radioactive process, thus still releasing heat energy. The greater complement of unstable elements in the early Earth thus generated a greater amount of heat energy in its initial stages of formation.

33 - Work Done by a Gas and Heat Engines