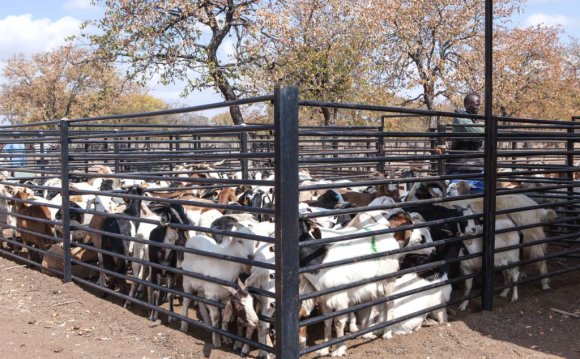 Hukuntsi — Farmers in the Kgalagadi area are always surrounded by ambiance of happiness looking at how their stock reproduces every year as theirs is not just rearing for family consumption but for commercial purposes.

One such farmer is Ms Lame Mepako, a 32- year -old resident of Lokgwabe in Kgalagadi North. Her journey to farming is an amazing one, aggravated by lack of employment opportunities coupled with the desire to engage in business.

She is not a novice to the world of farming because she grew up in a family where agriculture buttered their daily bread. Armed with such background, she knew that small stock farming would be a gateway to greener pasture in her life.

Ms Mepako started small stock farming with only 30 goats courtesy of LIMID in 2011. As it is a known fact that climatic conditions of Kgalagadi favour certain breed of goats, the Lokgwabe based farmer chose Tswana breed because of its adaptability and easy keeping.

Asked why amongst many agricultural enterprises she chose small stock, she said every business person is focused on profit therefore small stock farming has a great return. Moreover, small stock can conceive twice a year therefore increasing chances of profit making, she added.

As fate may have it, immediately after being funded by LIMID, her goats were attacked by contagious abortion; a problem which she said made her strong as she sought assistance from the veterinary officers.

She said the tragedy was also a blessing in disguise because the following year, her stock reproduced more, the situation she said served as a great lesson that a farmer needs perseverance to overcome awkward times.

Ms Mepako stressed on the importance of managing the flock to determine income generated from the project and also highlighted the need to provide supplementary feeding to lactating goats.

"A doe should lactate for a month and then wean in order to prepare it for the next conception and there must be several paddocks for lactating does, bucks and for feeding. Kids have to be kept and fed separately to avoid stamping by older ones" she said.

She sells to farmers funded by government through LIMID and Young Farmers Fund and also to individuals. Ms Mepako cited as challenges predators such as jackals and hyenas which kill her animals, adding that she has introduced a Sheppard dog as a remedial measure.

As the world of business is full of uncertainties, the Lokgwabe youth farmer has considered diversifying her business by bringing in cattle.

She had sold some of her goats to buy cattle.Moreover, she is planning to approach the Department of Culture and Youth in Hukuntsi regarding the idea of business expansion