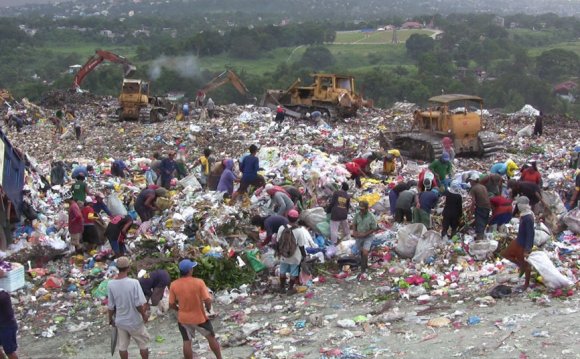 If there's one thing your citizens like to do, it's produce garbage. All peopled buildings in your city, public and private, will produce garbage that needs to be disposed of, either in a landfill or at an incinerator. Every building will have a level of garbage accumulation (viewable in the garbage interface). If this level gets too high, then you will be notified that "garbage has piled up". If left unaddressed, this can cause a building to become abandoned. The mechanics of garbage disposal are very similar to those of deathcare.

Garbage disposal buildings will spawn garbage trucks (15 from each landfill, 27 from each incinerator), which drive around your streets emptying buildings of their garbage. Garbage trucks don't actually stop to collect garbage, but will empty homes just by driving past them. Once a truck is full it will unload at the landfill or incinerator.

Garbage accumulation can happen due to the following interrelated circumstances:

Once a landfill is 100% full, its 15 trucks will not be deployed, even if your remaining garbage infrastructure could use them. These trucks will however be deployed again if you choose to empty a landfill.

Once full, landfill sites will not aid garbage processing regardless of whether they are switched on or off. Switching off landfill sites saves the city treasury from needlessly paying their upkeep cost.

At maximum capacity a single incinerator will take over three years to burn the contents of a single full landfill site. However, if sufficient funds are available, a problematic landfill site can be emptied quicker by servicing it with multiple incinerators. Making the road connections as short as possible, and isolating these buildings from the rest of the city will ensure maximum efficiency.

Incinerators have no excess burn capacity - their own trucks are more than capable of maxing out the monthly burn rate. As such there is little point to emptying and refilling landfills, this will simply cause the incinerator trucks to go unused. Once incinerators become available the optimal strategy for most cities is likely to be to switch to an incinerator-only garbage system. In theory, incinerators are essential - in a city which only used landfill sites the space taken up by landfill would rise without limit.

The garbage overlay view gives a visual indicator of your garbage production vs incineration capacity. If your incineration capacity is in the red, you should build more incinerators. If the capacity is in the green, yet garbage is still piling up, it indicates that there are road connectivity or congestion problems preventing or delaying garbage trucks from collecting garbage. In this case building more incinerators will be of little use, however it may be useful to relocate existing incinerators to be closer to where the garbage is generated.

While it is useful to distribute garbage facilities around the city for efficient pickup and minimal congestion, the pollution they cause can be troublesome. This is especially true if it leaches into residential zones, resulting in citizen sickness. Commercial and office zones are more tolerant, but pollution will tend to limit their levelling up to level 2. Aside from isolated areas, garbage buildings will have least impact when nested in industrial zones, where their pollution will be similar to that of the surrounding buildings.

There is a quirk with incinerators which can cause them to eliminate significantly more garbage than their nominal burn rate. The quirk is that when an incinerator truck returns to the incinerator, but the incinerator stores are full, the garbage on the truck simply disappears along with the truck. Due to garbage truck dispatch logic which results in full trucks returning home in large waves, large quantities of garbage can be disappeared in this way and in practice around 25% fewer incinerators may be needed than the garbage overlay indicates.

How to Fix a Garbage Disposal

wikiHow to Maintain a Garbage Disposal