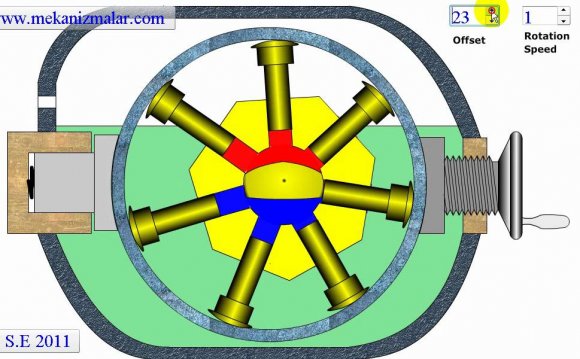 The four strokes of the cycle are intake, compression, power, and exhaust. Each corresponds to one full stroke of the piston; therefore, the complete cycle requires two revolutions of the crankshaft to complete.

During the intake stroke, the piston moves downward, drawing a fresh charge of vaporized fuel/air mixture. The illustrated engine features a poppet intake valve which is drawn open by the vacuum produced by the intake stroke. Some early engines worked this way; however, most modern engines incorporate an extra cam/lifter arrangement as seen on the exhaust valve. The exhaust valve is held shut by a spring (not illustrated here).

As the piston rises, the poppet valve is forced shut by the increased cylinder pressure. Flywheel momentum drives the piston upward, compressing the fuel/air mixture.

At the top of the compression stroke, the spark plug fires, igniting the compressed fuel. As the fuel burns it expands, driving the piston downward.

At the bottom of the power stroke, the exhaust valve is opened by the cam/lifter mechanism. The upward stroke of the piston drives the exhausted fuel out of the cylinder.

In fact, the illustration is correct; it just moves so fast it’s difficult to see! Here’s a close-up of the frames just at the point the plug fires:

My original intent was to accurately show that the points need to remain closed for only a fraction of a second, called the dwell. By illustrating this, I inadvertently obscured the overall operation of the circuit. Perhaps someday I’ll prepare a more detailed illustration of the ignition system alone.

Larger four stroke engines usually include more than one cylinder, have various arrangements for the camshaft (dual, overhead, etc.), sometimes feature fuel injection, turbochargers, multiple valves, etc. None of these enhancements changes the basic operation of the engine.