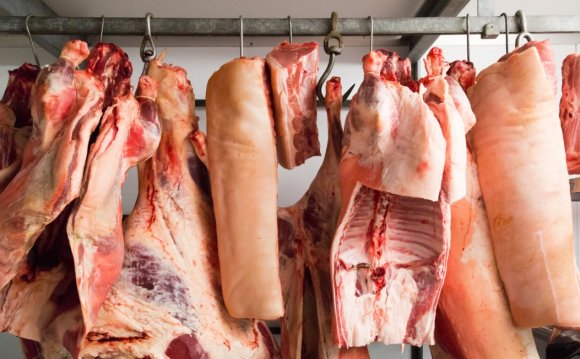 If you adjust for inflation and income, Americans have never spent less on food than they have in recent years. And yet many feel we've also never paid such a high price.

U.S. Department of Agriculture figures show the average American spent just 9.5 percent of his or her disposable income on food last year, a lower percentage than in any country in the world.

And although meat consumption has risen slightly over the past 40 years, its impact on the pocketbook is less than half of what it was in 1970, falling from 4.1 percent to 1.6 percent in 2008.

The majority of this cheap protein is delivered by "factory farms" that house thousands of animals in confinement. These concentrated animal feeding operations, or CAFOs, produce mass quantities of food at low cost.

"We have found the most efficient way to meet consumer demand for a high-quality, relatively inexpensive product, " said Dave Warner, spokesman for the National Pork Producers Council in Washington, D.C. "We're the lowest-cost producer in the world, which is why we're the No. 1 pork exporter in the world."

But the system also has created disasters like last month's recall of half a billion salmonella-tainted eggs. Critics say the consolidation of food production has led to environmental damage, the loss of millions of small independent farms, rising health care expenditures and billions in tax-funded subsidies to produce cheap animal feed.

The U.S. House of Representatives held hearings this week on just what went wrong with the factory-farmed eggs implicated in the salmonella outbreak and whether regulation could have helped. But many environmentalists, farmers and advocates of "sustainable" food say that even with better regulation, this kind of agriculture is not sustainable and only artificially cheap.

"Cheap is in the eyes of the accountant, " said Daniel Imhoff, a researcher who edited the new book "CAFO: The Tragedy of Industrial Animal Factories." "Somehow we've forgotten how to add the total costs of cheap meat production to our health, environment, the loss of vibrant rural communities with lots of family farms."

The costs not calculated in the direct consumer price of meat and other animal products — called externalities — touch on a variety of issues. Among them:

Meat producers put antibiotics in feed to make the animals grow faster and to prevent disease. But this summer, officials from several federal agencies, including the Centers for Disease Control and Prevention, testified in support of new guidelines that would curb CAFOs' nontherapeutic use of antibiotics, citing a rise in dangerous antibiotic-resistant infections.

Aquaponic Farm with Fish & Vegetables at a Former Meat ...

Sick as a pig: how factory farmed animals are brewing up MRSA