Who won the Phoenix Open? 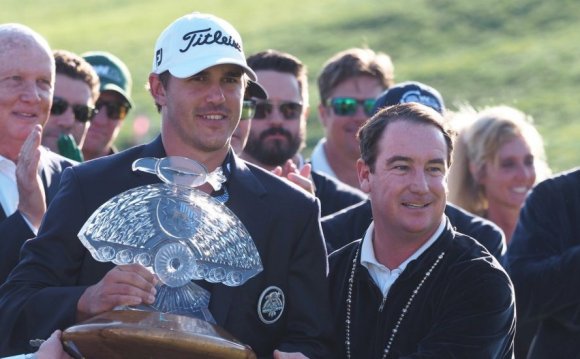 In an afternoon of ugly shots, it was Bubba Watson who made the last bogey to give Kevin Stadler his first career win and a spot in the Masters with his father.

If you needed a diversion from the endless Super Bowl pregame inanities, the Waste Management Phoenix Open delivered a bit of drama Sunday afternoon thanks to the misadventures of the leaders. Kevin Stadler and Bubba Watson took turns coughing up the lead early in the afternoon, and after a wild 18th hole it was Stadler who outlasted Watson to earn his first PGA Tour win in 239 tries.

Stadler raced out to three straight birdies to start his round, pushing the 54-hole leader Watson to stay on form. The son of the Walrus eventually took the lead at the turn, carding birdie on the 9th while watching Bubba bogey for a two-shot swing. But Stadler's new lead lasted just one hole, as he sent a ball off the map that stuck to some of the local Phoenix flora. It was just the first highlight in a sequence of ugliness at TPC Scottsdale, and Stadler was allowed to leave his ball stuck to the cactus needles in mid-air and drop a new Srixon.

It was a new and interesting way to make a double bogey and quickly relinquish the lead.

Watson, one of the longest hitters on Tour and the leader in terms of strokes gained off the tee, still had two par-5s ahead of him. It seemed likely that he would push the number towards 20-under. But Bubba went splash on the easier 15th hole to squander the second of those two opportunities coming in to the clubhouse. As is custom with Bubba, his tee ball had a ton of action on it, and it promptly sailed left into the water running up the side of the fairway.

Watson, trying to rip his next shot up to the green, almost put it in the water again, just landing on the rough that banked the drink in front of the putting surface. After those two awful mishits, the 2012 Masters champ made a routine up-and-down to save one of the more ridiculous pars you'll see all season.

Following that crucial save, Bubba did bring the field back into it with a bogey at No. 16, momentarily pulling into a three-way tie with Graham DeLaet and Stadler. But he would get it back with a critical birdie putt on the 17th, matching Stadler at 16-under with one hole to play.

So after visits into the cactus and water, respectively, Stadler and Watson came to the 18th tee back in command. The 18th, like many at TPC Scottsdale, is a manageable hole, especially for a bomber like Bubba. But Watson got wild again, sending his drive deep into the right rough and then completely airmailing his approach shot into the gallery behind the green.

Bubba made an admirable attempt to run his chip in for the birdie, but he missed on the left side of the cup. He still had an opportunity to make a relatively easy par putt, but he again burned the edge for bogey to give it away. It was the closest he'd come to his first win since the 2012 Masters.

Stadler played the hole in much less adventurous fashion, putting his drive in the middle of the fairway and hitting a comfortable wedge to the back of the green. His approach shot tickled the back fringe, but spun back to a few feet from the hole. He lipped out a clinching birdie putt, but tapped in for par to leave it up to Bubba, who couldn't seal the deal. Watson didn't exactly apply the pressure, but it was still a pretty impressive tee-to-green display from the first-time winner.

Stadler, who has knocked on the door and cashed plenty of checks throughout his career, now gets that coveted Masters invite and a chance to play in the same field with his dad, Craig, at Augusta - the first ever father-son duo at the Masters.

Kevin Stadler on winning after Bubba Watson's missed putt: "It's been a long time coming, so I'll take it any way I can get it."