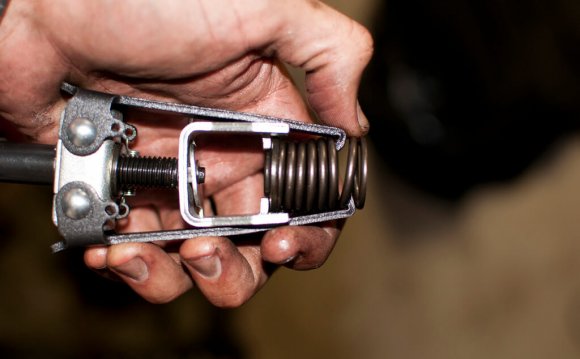 Internal Combustion Engines or IC Engines as they are popularly known as, is used in everyday life and almost everywhere such as in cars and bikes. Study of Engines has evolved into a branch of Mechanical Engineering.

There are two types of IC Engines,

Also the engines can also be classified on what cycles they follow, given below

In the two stroke, there are just two cycles and each of them having two cycles running concurrently.
a. intake/exhaust
b. ignition/compression

Compression Ratio An engine is basically a pump which squeezes in air/fuel mixture and then ignites it so that it expands back and produces the mechanical energy. The compression ratio is basically tells how much the engine squeezes a certain volume of air that it intakes. So a vehicle with a compression ratio of 12:1 means that for every 12 unit volume of air that is sucked in, the piston squeezes that air to 1 unit volume. The more air that is squeezed into the piston the more energy is produced per engine capacity on the expansion stroke.

One of the limiting factors in increasing the compression ratio is called detonation (known as engine knocking or pinging) where instead of burning in a controlled fashion, the air/fuel mixture explodes, potentially damaging the engine. Also, a higher compression engine tends to have less clearance between the piston at top dead center(TDC) and the valves fully opened, and running at a high rpm can lead to valve float which can leads to contact between the valves and piston.

Petrol Engine Petrol Engines, also known as Spark Ignition engines, needs ignition from an external source for the engine to start. As the name suggests, this engine uses spark plug for providing a spark and the fuel used is petrol(gasoline).

Systems of the petrol engine

2. The ignition system supplies the sparks to ignite the fuel mixture in the cylinders. By means of an ignition coil and contact breaker, it charges a 12-volt battery, which in the turn produces pulses of 20, 000 volts. These go via a distributor to the spark plugs in the cylinders, where they create sparks. Ignition of the fuel in the cylinders produces temperatures of 700°C or more.

3. In water-cooling system which water circulates through channels in the cylinder block, thus extracting the heat. It flows through pipes in a radiator, which are cooled by fan-blown air.

4. The lubrication system also reduces some heat, but it's function job is to keep the moving parts coated with oil, which is pumped under pressure to the camshaft, crankshaft, and valve-operating gear.

5. Carburetor is the heart of petrol/gasoline engine. It meters the fuel and air mixture in precise proportions. Old carburetors do spark advance by measuring the difference in pressure between the outside and inside of the carburetor. The amount of throttle advance is also measured. The engine's remains which may be carbon monoxide or unburned hydrocarbons shows how well the carburetor is working.

Classification of the petrol engines

Reciprocating engines are classified in a number of ways. Some of them are as:

1. According to the way they are cooled,

a. air-cooled- engines have to radiate out the heat from the engine to the surrounding air.Generally aluminium fins are provided as they are good conductors of heat.

b. water-cooled- engines have water through which water circulates to conduct heat to to the water which flows in jackets provided on cylinder.

2. According to the number of strokes,

a. 2-stroke engines- complete the thermodynamic cycle in two strokes of the piston(one craank revolution).

b. 4-stroke engines- complete the thermodynamic cycle in four strokes of the piston(two craank revolution).

a. In line cylinder arrangement- all the cylinders are arranged in a straight line.

b. V-cylinder engine or V-engine- two cylinder inclined to each other at 90degree.

c. V-8 engine- in this type of arrangement two blocks inclined at 90degree to each other and each block has four cylinders.

4. According to the valve arrangement,

Parts of the petrol engine