What is four stroke cycle? 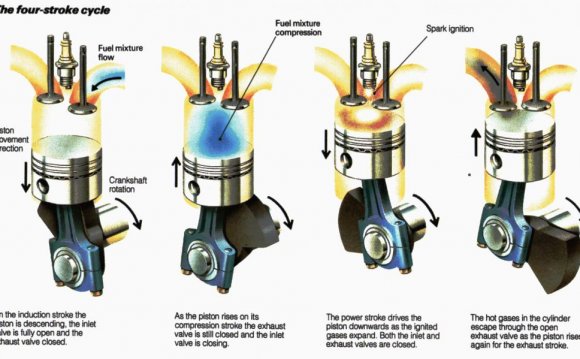 Automobile engines are spoken of as four-cycle engines. This is a shortening of the correct name, four-stroke cycle. A stroke is one complete down or one complete up movement of the piston. There are two downstrokes and two upstrokes to a cycle for the internal combustion engine of this design. A cycle is a round of events, which occurs in a certain fixed order.

There are four events in the automobile-engine cycle. These four events correspond to the four strokes. Thus we have the name, the four-stroke cycle, or the shortened and more used term, the four-cycle engine.

The intake valve (right) must start to open as intake (first down-stroke) starts. It must close when compression (first upstroke) starts. Both valves must remain closed during compression and power (first upstroke and second downstroke). The exhaust valve must open at the beginning of the exhaust stroke and remain open to the finish of this, the second upstroke. The intake valve opens on the first stroke to let the fuel charge in. The exhaust valve opens on the fourth stroke to let the burned gases out.

While the four strokes of the piston are bound to be of equal length, it is not true that the same amount of piston travel is assigned to each stroke. As a matter of fact, there is a wide difference in the degrees of crankshaft travel of the four operations. There are 360 deg. to each circle. A flywheel turning twice will then travel through two circles, or 720 deg. This number of degrees is then divided between the four strokes of the cycle.

A full stroke of the piston is 180 deg. Four full strokes of the piston represent 720 deg. flywheel travel. Roughly speaking, the operation corresponds to the piston stroke. The setting of the cams on the shaft and the shape of the cam determines the length of time the valve will be held open, as well as its moment of opening and closing. In most engines, this occurs about as follows:

The starting point for all figuring in engine valve timing is t.d.c. (top dead centre). This refers to the t.d.c. for the first piston in its cylinder. This position is often marked on the flywheel.

What is the Difference Between 2-Cycle Oil & Motor Oil?