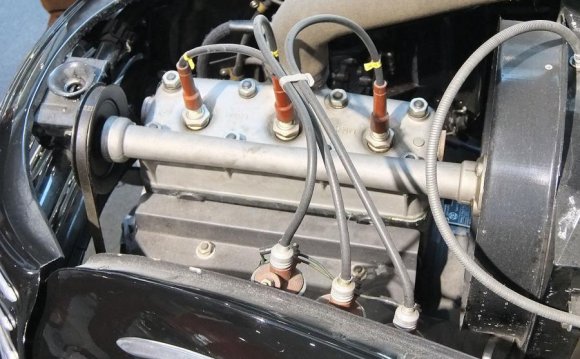 A 4-stroke Engine: The Natural Choice for a Comeback

Honda returned to the 500 cc class of the World Motorcycle Grand Prix series in 1979, following a twelve-year hiatus. The machine they had developed for their comeback - an entry in the World Grand Prix's most prominent class - was the NR500, powered by a four-stroke, DOHC V-four engine. With its oval piston engine incorporating eight valves and two connecting rods per cylinder, plus an aluminum semi-monococque frame complete with an inverted front fork, the machine surprised everyone with its daringly innovative technologies.

The oval piston engine (0X engine, developed in 1979) was a product of Honda's drive to conquer technical challenges.

"When I look back at it, I'm not sure if we were experimenting with cutting-edge technologies or obsessed with foolish ideas, " recalled Toshimitsu Yoshimura, an engineer involved in the development of the NR500's oval piston engine.

"At least we were doing something that was beyond the realm of conventional thinking. I'm not just talking about us, who were designing the engine, but also those who were creating the body.

"The emphasis was to create a difference-not just any difference but the difference that would work to our definite advantage. That's why we decided that Honda should go with four-stroke engines. We wanted to achieve our target through innovative technology, and in so doing have the edge over our competition."

Road-racing circuits were in those days dominated by bikes with two-stroke engines. Despite this trend Honda went with its NR500 machines equipped with a four-stroke engine. That decision, however, wasn't so much a bold move as it was a natural choice.

During its first years in motorcycle racing - dating back to a memorable entry in the Isle of Man TT Race - Honda won event after event with four-cycle engines. They achieved so much success, in fact, that four-cycle engines came to be thought of as a Honda specialty. Though two-stroke engines had the benefit of relatively higher output, nobody could stop Honda from wanting to develop four-stroke engines capable of producing even greater power. In that regard, the conventional thinking proved somewhat contrary at Honda. In fact, competing in the TT race was in every perspective an extraordinary decision.

Adding to the Honda preoccupation with four-stroke engines was the fact that many in top management, who had decided to make a comeback in the World Grand Prix series, and those involved in the development, were imbued with the philosophies of Soichiro Honda, who had criticized two-stroke engines as being little more than "bamboo tubes." To them, it was simply out of the question to reclaim their victory with anything less than a four-cycle engine.

Yoshimura, who had actually designed the engine, was from the very beginning a staunch advocate of the four-cycle approach. "Four-stroke engines, " he said, "have distinctive mechanical processes. The (intake) valve closes tight, combustion occurs, the exhaust valve opens, and the exhaust is released. It's a sequence of independent processes, each with a different function, working together to facilitate the engine's entire operation. This is really fascinating, from an engineering standpoint. I believe this mechanism will be the basis of further advancement in engine technology."

Afterall there is no point in participating in a race if one isn't confident of victory. However, that confidence must come from hard work and the determination to stay the course through thick and thin. No matter how difficult the journey, one must continue as long as there is the slightest possibility of a positive outcome. It is in this very struggle that the value of one's endeavor exists. Honda engineers recognized how difficult the process could be, but ultimately they also knew success would be gratifying. Thus, the development team's decision to return to glory with four-stroke engines was most appropriate.