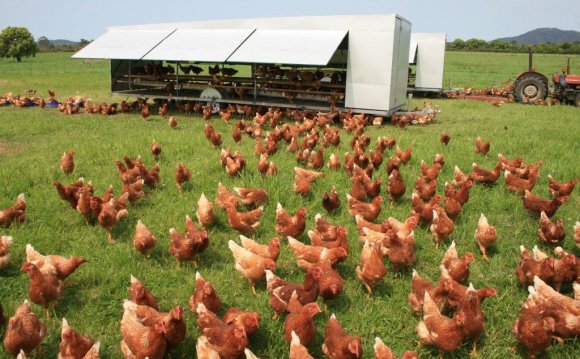 A small flock of mixed free-range chickens being fed outdoors.

Free range denotes a method of farming husbandry where the animals, for at least part of the day, can roam freely outdoors, rather than being confined in an enclosure for 24 hours each day. On many farms, the outdoors ranging area is fenced, thereby technically making this an enclosure, however, free range systems usually offer the opportunity for extensive locomotion and sunlight prevented by indoor housing systems. Free range may apply to meat, eggs or dairy farming.

If one allows "free range" to include "herding", free range was a typical husbandry method at least until the development of barbed wire and chicken wire. The generally poor understanding of nutrition and diseases before the twentieth century made it difficult to raise many livestock species without giving them access to a varied diet, and the labor of keeping livestock in confinement and carrying all their feed to them was prohibitive except for high-profit animals such as dairy cattle.

In the case of poultry, free range was the dominant system until the discovery of vitamins A and D in the 1920s, which allowed confinement to be practiced successfully on a commercial scale. Before that, green feed and sunshine (for the vitamin D) were necessary to provide the necessary vitamin content. Some large commercial breeding flocks were reared on pasture into the 1950s. Nutritional science resulted in the increased use of confinement for other livestock species in much the same way.

The term "free range" is mainly used as a marketing term rather than a husbandry term, meaning something on the order of, "low stocking density, " "pasture-raised, " "grass-fed, " "old-fashioned, " "humanely raised, " etc.

There have been proposals to regulate by the USDA the labeling of products as free range within the United States. As of now what constitutes raising an animal free range is entirely decided by the producer of that product

In poultry-keeping, "free range" is widely confused with yarding, which means keeping poultry in fenced yards. Yarding, as well as floorless portable chicken pens ("chicken tractors") may have some of the benefits of free-range livestock but, in reality, the methods have little in common with the free-range method.