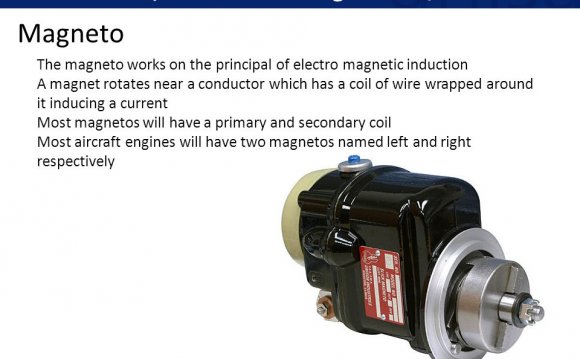 The simplest form of spark ignition is that using a magneto. The engine spins a magnet inside a coil, or, in the earlier designs, a coil inside a fixed magnet, and also operates a contact breaker, interrupting the current and causing the voltage to be increased sufficiently to jump a small gap. The spark plugs are connected directly from the magneto output. Early magnetos had one coil, with the contact breaker (sparking plug) inside the combustion chamber. In about 1902, Bosch introduced a double-coil magneto, with a fixed sparking plug, and the contact breaker outside the cylinder. Magnetos are not used in modern cars, but because they generate their own electricity they are often found on piston-engined aircraft engines and small engines such as those found in mopeds, lawnmowers, snowblowers, chainsaws, etc. where a battery-based electrical system is not present for any combination of necessity, weight, cost, and reliability reasons.

Magnetos were used on the small engine's ancestor, the stationary "hit and miss" engine which was used in the early twentieth century, on older gasoline or distillate farm tractors before battery starting and lighting became common, and on aircraft piston engines. Magnetos were used in these engines because their simplicity and self-contained operation was more reliable, and because magnetos weighed less than having a battery and dynamo or alternator.

Aircraft engines usually have dual magnetos to provide redundancy in the event of a failure, and to increase efficiency by thoroughly and quickly burning the fuel air mix from both sides towards the center. The Wright brothers used a magneto invented in 1902 and built for them in 1903 by Dayton, Ohio inventor, Vincent Groby Apple. Some older automobiles had both a magneto system and a battery actuated system (see below) running simultaneously to ensure proper ignition under all conditions with the limited performance each system provided at the time. This gave the benefits of easy starting (from the battery system) with reliable sparking at speed (from the magneto).

The output of a magneto depends on the speed of the engine, and therefore starting can be problematic. Some magnetos include an impulse system, which spins the magnet quickly at the proper moment, making easier starting at slow cranking speeds. Some engines, such as aircraft but also the Ford Model T, used a system which relied on non rechargeable dry cells, (similar to a large flashlight battery, and which was not maintained by a charging system as on modern automobiles) to start the engine or for starting and running at low speed. The operator would manually switch the ignition over to magneto operation for high speed operation.

To provide high voltage for the spark from the low voltage batteries, a 'tickler' was used, which was essentially a larger version of the once widespread electric buzzer. With this apparatus, the direct current passes through an electromagnetic coil which pulls open a pair of contact points, interrupting the current; the magnetic field collapses, the spring-loaded points close again, the circuit is reestablished, and the cycle repeats rapidly. The rapidly collapsing magnetic field, however, induces a high voltage across the coil which can only relieve itself by arcing across the contact points; while in the case of the buzzer this is a problem as it causes the points to oxidize and/or weld together, in the case of the ignition system this becomes the source of the high voltage to operate the spark plugs.

In this mode of operation, the coil would "buzz" continuously, producing a constant train of sparks. The entire apparatus was known as the 'Model T spark coil' (in contrast to the modern ignition coil which is only the actual coil component of the system). Long after the demise of the Model T as transportation they remained a popular self-contained source of high voltage for electrical home experimenters, appearing in articles in magazines such as and projects for school science fairs as late as the early 1960s. In the UK these devices were commonly known as trembler coils and were popular in cars pre-1910, and also in commercial vehicles with large engines until around 1925 to ease starting.

The Model T (built into the flywheel) differed from modern implementations by not providing high voltage directly at the output; the maximum voltage produced was about 30 volts, and therefore also had to be run through the spark coil to provide high enough voltage for ignition, as described above, although the coil would not "buzz" continuously in this case, only going through one cycle per spark. In either case, the low voltage was switched to the appropriate spark plug by the 'timer' mounted on the front of the engine. This performed the equivalent function to the modern distributor, although by directing the low voltage, not the high voltage as for the distributor. The timing of the spark was adjustable by rotating this mechanism through a lever mounted on the steering column. As the precise timing of the spark depends on both the 'timer' and the trembler contacts within the coil, this is less consistent than the breaker points of the later distributor. However, for the low speed and the low compression of such early engines, this imprecise timing was acceptable.

With the universal adoption of electrical starting for automobiles, and the availability of a large battery to provide a constant source of electricity, magneto systems were abandoned for systems which interrupted current at battery voltage, using an ignition coil (a transformer) to step the voltage up to the needs of the ignition, and a distributor to route the ensuing pulse to the correct spark plug at the correct time.

The first reliable battery operated ignition was developed by the Dayton Engineering Laboratories Co. (Delco) and introduced in the 1910 Cadillac. This ignition was developed by Charles Kettering and was a wonder in its day. It consisted of a single coil, points (the switch), a capacitor and a distributor set up to allocate the spark from the ignition coil timed to the correct cylinder. The coil was basically a transformer to step up the low battery voltage (6 or 12 V) to the high ignition voltage required to jump a spark plug gap.

The capacitor has two functions. Its main function is to form a series resonant circuit with the ignition coil. During resonance, energy is repeatedly transferred to the secondary side until the energy is exhausted. As a result of this resonance the duration of the spark is sustained and so implements a good flame front in the air/fuel mixture. The capacitor, by default minimizes arcing at the contacts at the point of opening. This reduces contact burning and maximizes point life. The Kettering system became the primary ignition system for many years in the automotive industry due to its lower cost, higher reliability and relative simplicity.