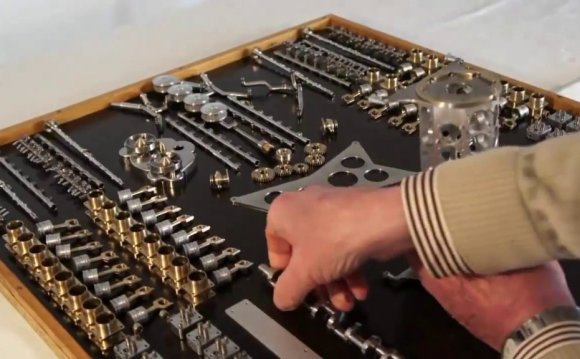 In the later chapters of The Quest, Daniel Yergin summarizes the history of the internal combustion engine. He begins by recounting a meeting of Henry Ford and Thomas Edison at a convention in August 1896, at which they sat together. Ford had just built his first gasoline-powered “quadricycle.” He sketched out his design to Edison. Edison told him that the problem with electric-powered vehicles is that they “must keep near a power station.” Edison told Ford to stick with the internal combustion engine.

The internal combustion engine was invented by Nikolaus Otto. His “Otto cycle” engine, developed in 1876, is still recognizable in our engines today: valves, a crankshaft, spark plugs, and a single cylinder. Otto teamed with Karl Benz to produce automobiles, and Gottlieb Daimler was in close competition. (In the twentieth century, the two companies merged, though Benz and Daimler never met each other.) By the 1890’s Daimler was distributing his cars in America.

Germany competed with France — with the French engineers Armand Peugeot and Louis Renault — for supremacy in the development of the automobile. Britain was initially left behind because its railway industry, fearing competition, got Parliament to pass the Red Flag Acts that limited “road locomotives” to four miles an hour in the country and two miles an hour in cities — as well as requiring a man carrying a red flag to walk in front of road vehicles hauling multiple wagons.

At the turn of the last century, the internal combustion engine was well behind other technologies, including steam and electricity, in the auto industry. In 1900, most of the 2, 370 cars in New Yor City, Boston and Chicago were either seam cars like the Stanley Steamer or electrics. But electrics faced the problem of battery life — just as they do today. Edison worked on improving batteries, but in 1908 Ford introduced his first Motel T, priced at only $825. A few years later Ford introduced the assembly line, and the rest, as they say, is history. By 1910, the race between electric and gasoline was over.

The automobile also saved the oil industry. Until Americans fell in love with their car, gasoline was mostly a byproduct of the refining process, which produced kerosene for lighting. Just when electricity was spelling the end of the kerosene lamp, the automobile saved the day, opening a new market for the oil industry. The first gas staion, or “station for autoists, ” opend in St. Louis in 1907. By the end of the 1920’s, there were hundres of thousands of gas stations. Americans were hitting the roads.

To understand the power of gasoline, a little basic chemistry is necessary. (A very little – as a lawyer, I’m skating close to the edge here.)

Gasoline is composed of different mixtures of hydrocarbons. Hydrocarbons are molecules that contain carbon and hydrogen atoms. The simplist hydrocarbon molecule is methane (the natural gas you burn in your stove), which contains one carbon and four hydrogen molecules – CH4. Ethane, also a gas, contains two carbon atoms and six hydrogen atoms – C2H6. Propane contains three carbon atoms and eight hydrogen atoms– C3H8. Butane contains four carbon atoms and ten hydrogen atoms – C4H10. Methane, ethane, propane and butane are all gases at atmospheric pressures. But as the hydrocarbon chain becomes longer, it is easier to compress these gases into a liquid. Butane and Propane are sold by the gallon, under pressure. Methane requires much higher pressures to condense into a liquid, making it technologically more difficult to use it as a transportation fuel.

Pentanes, hexanes, heptanes and octanes are hydrocarbons with five, six, seven and eight carbon atoms. These hydrocarbons tend to be liquid at atmospheric temperatures and pressures. They make up the components of gasoline.

When hydrocarbons ignite, the chemical reaction produces carbon dioxide, water, and energy. The formula for combustion of methane is CH4 + 2 O2 → CO2 + 2 H2O . A methane molecule reacts with two oxygen molecules to produce a molecule of carbon dioxide and two molecules of water. In the process, energy is released. The same basic chemistry results from the burning of gasoline in the internal combustion engine.

Competing technologies attempting to break into the transportation fuel economy — electric, hybrid, hydrogen, biofuels, natural gas — all have difficulty matching the efficiency and convenience of the internal combustion engine, because of the high energy content and convenience of gasoline. Despite huge investments and incentives by the auto industry and governments, no clear alternative to gasoline has yet emerged. But Yergin believes that gasoline’s dominance may soon wane:

One way or the other, oil’s almost total domination over transportation will either be whittled away or more drastically reduced. …

The Secret Life Of Machines - The Internal Combustion ...

The Future of the Internal Combustion Engine - /Inside ...