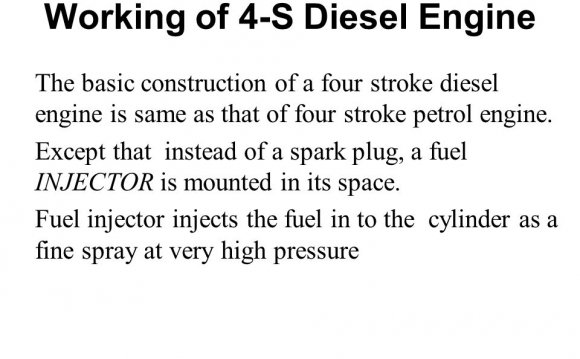 The Stirling engine is one of my favorites. It was invented in 1816 by Rev. Robert Stirling of Scotland. The Stirling is a very simple engine, and was often billed as a safe alternative to steam, since there’s no risk of a boiler explosion. It enjoyed some success in industrial applications, and also in small appliances like fans and water pumps, but it was eclipsed by the advent of inexpensive electric motors. However, because it can run on any source of heat, it now holds promise for alternative fuel engines, solar power, geothermal power, etc.

Stirling engines feature a completely closed system in which the working gas (usually air but sometimes helium or hydrogen) is alternately heated and cooled by shifting the gas to different temperature locations within the system.

The Stirling cycle can be thought of as four different phases: expansion, transfer, contraction, and transfer.

Most of the gas in the system has just been driven into the hot cylinder. The gas heats and expands driving both pistons inward.

The gas has expanded (about 3 times in this example). Most of the gas (about 2/3) is still located in the hot cylinder. Flywheel momentum carries the crankshaft the next 90 degrees, transferring the bulk of the gas to the cool cylinder.

The majority of the expanded gas has shifted to the cool cylinder. It cools and contracts, drawing both pistons outward.

The contracted gas is still located in the cool cylinder. Flywheel momentum carries the crank another 90 degrees, transferring the gas to back to the hot cylinder to complete the cycle.

This engine also features a regenerator, illustrated by the chamber containing the green hatch lines. The regenerator is constructed of material that readily conducts heat and has a high surface area, typically a mesh of closely spaced, thin metal plates. When hot gas is transferred to the cool cylinder, it is first driven through the regenerator, where a portion of the heat is deposited. When the cool gas is transferred back, this heat is reclaimed; thus the regenerator “pre heats” and “pre cools” the working gas, dramatically improving efficiency.