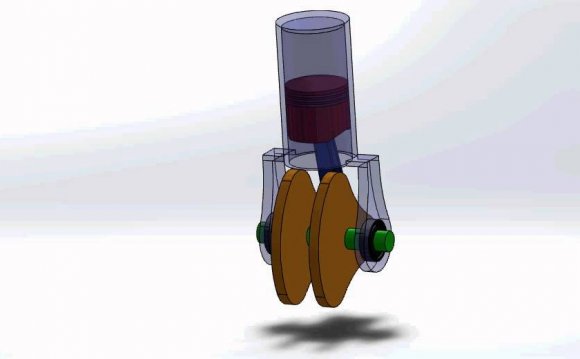 This type of Stirling engine, known as the beta configuration, features just one cylinder with a hot end and a cool end. The working gas is transferred from one end of the cylinder to the other by a device called a displacer (illustrated in blue). The displacer resembles a large piston, except that it has a smaller diameter than the cylinder, thus its motion does not change the volume of gas in the cylinder—it merely transfers the gas around within the cylinder.

The same four phases of the Stirling cycle are at work in this engine:

Most of the gas in the system has just been driven to the hot end of the cylinder. The gas heats and expands, driving the piston outward.

The majority of the expanded gas has shifted to the cool end. The gas cools and contracts, drawing the piston inward.