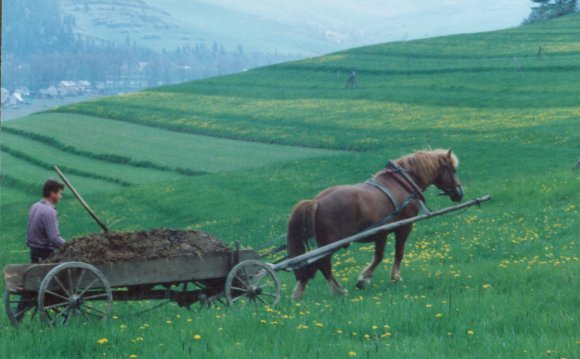 Much of the agriculture practiced in the United States today is industrial-style agriculture. That is, farms are often very large, highly specialized, and run like factories with large inputs of fossil fuels, pesticides and other chemicals, and synthetic fertilizers derived from oil. This industrial agriculture is sometimes considered a great success. But is it? It has had large, complex effects on our environment, our economy, and our urban and rural social fabric. A new awareness of the costs is beginning to suggest that the benefits are not as great as they formerly appeared.

Many of the costs of industrial agriculture have been hidden and ignored in short-term calculations of profit and productivity, as practices have been developed with a narrow focus on increased production. The research establishment that underpins modern industrial agriculture has until recently paid little heed to the unintended and long-term consequences of these systems.

Approaches to producing food must be measured partly by their impact on the natural ("life support") systems that we depend on. The currently dominant system of industrial agriculture – which voters and taxpayers have unknowingly promoted and subsidized through ill-considered government food and farm policy choices – impacts the environment in many ways. It uses huge amounts of water, energy, and chemicals, often with little regard to long-term adverse effects. But the environmental costs of agriculture are mounting. Irrigation systems are pumping water from reservoirs faster than they are being recharged. Toxic herbicides and insecticides are accumulating in ground and surface waters. Chemical fertilizers are running off the fields into water systems where they generate damaging blooms of oxygen-depleting microorganisms that disrupt ecosystems and kill fish. Unmanageable and polluting mountains of waste and noxious odor are the hallmarks of industrial-style CAFOs (confined animal feeding operations) for poultry and livestock.

Many of the negative effects of industrial agriculture extend far from fields and farms. Nitrogen compounds from Midwestern farms, for example, travel down the Mississippi to degrade coastal fisheries and create a large "dead zone" in the Gulf of Mexico where aquatic life cannot survive. But other adverse effects are showing up within agricultural production systems themselves - for example, overuse of herbicides and insecticides has led to rapidly developing resistance among pests that is rendering these chemicals increasingly ineffective.

Estimating the economic costs of industrial agriculture is an immense and difficult task. A full accounting would weigh the benefits of the somewhat lower prices consumers pay for food and the profits of agri-business giants, including fertilizer and pesticide manufacturers, against the health and societal costs of environmental pollution and degradation, for instance.

Such costs are difficult to assess for a number of reasons. One difficulty is our partial understanding of potential harms. A good example is the potential for endocrine disruption that many pesticides appear to have. Endocrine disrupters are molecules that appear able to mimic the actions of human and animal hormones and disturb important hormone-dependent activities like reproduction. More research is needed to determine the extent of the health and environmental damage done by such compounds and the relative contribution of agriculture and other sectors and activities. And in some instances, such as water pollution and global warming, agriculture is only one of several important contributors.

In addition, there are enormous indirect costs implicit in the high energy requirements of industrial agriculture. This form of agriculture uses fossil fuels at many points: to run huge combines and harvesters, to produce and transport pesticides and fertilizers, and to refrigerate and transport perishable produce cross country and around the world. The use of fossil fuels contributes to ozone pollution and global warming, which could exact a high price on agriculture and the rest of society through increased violent weather events, droughts and floods, and rising oceans.

The full costs of industrial agriculture—including the hidden costs of CAFOs revealed by UCS in the recent report CAFOs Uncovered—call into question the efficiency of this approach to food production.

Agriculture at a Crossroads

It is time to transform agriculture into a sustainable enterprise, one based on systems that can be employed for centuries - not decades - without undermining the resources on which agricultural productivity depends. The question is how to do it. The choices are to stick with the current system and adjust around the edges or to fundamentally rethink it. UCS is aiming for the transformation of U.S. agriculture to a system that is both productive and practical over the long-term. Apparent advantages of the current, industrial approach – from high yields per acre, to chemical industry profits, to profitable CAFOs (confined animal feeding operations), to foreign sales by corporate giants like Sara Lee, ConAgra, and Cargill – look very different when considered in the light of the health and other problems the approach creates, as well as the many ways in which consumers actually subsidize the destructive system with their tax dollars.

Industrial Farming - Pigs at dumping prices | Made in Germany