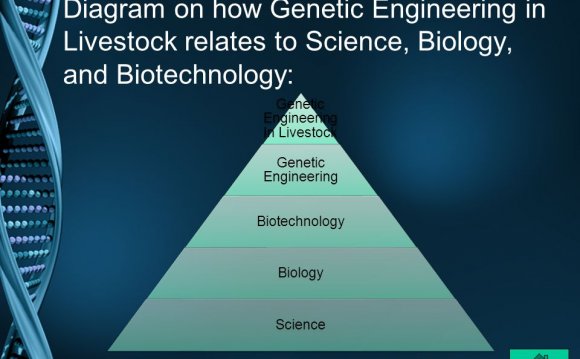 Over the last 30 years, the field of genetic engineering has developed rapidly due to the greater understanding of deoxyribonucleic acid (DNA) as the chemical double helix code from which genes are made. The term genetic engineering is used to describe the process by which the genetic makeup of an organism can be altered using “recombinant DNA technology.” This involves the use of laboratory tools to insert, alter, or cut out pieces of DNA that contain one or more genes of interest.

Developing plant varieties expressing good agronomic characteristics is the ultimate goal of plant breeders. With conventional plant breeding, however, there is little or no guarantee of obtaining any particular gene combination from the millions of crosses generated. Undesirable genes can be transferred along with desirable genes; or, while one desirable gene is gained, another is lost because the genes of both parents are mixed together and re-assorted more or less randomly in the offspring. These problems limit the improvements that plant breeders can achieve.

In contrast, genetic engineering allows the direct transfer of one or just a few genes of interest, between either closely or distantly related organisms to obtain the desired agronomic trait (Figure 1). Not all genetic engineering techniques involve inserting DNA from other organisms. Plants may also be modified by removing or switching off their own particular genes.

Genes are molecules of DNA that code for distinct traits or characteristics. For instance, a particular gene sequence is responsible for the color of a flower or a plant’s ability to fight a disease or thrive in extreme environment.

The “sharing” of DNA among living forms is well documented as a natural phenomenon. For thousands of years, genes have moved from one organism to another. For example, Agrobacterium tumefaciens, a soil bacterium known as ‘nature’s own genetic engineer’, has the natural ability to genetically engineer plants. It causes crown gall disease in a wide range of broad-leaved plants, such as apple, pear, peach, cherry, almond, raspberry, and roses. The disease gains its name from the large tumor-like swellings (galls) that typically occur at the crown of the plant, just above soil level. Basically, the bacterium transfers part of its DNA to the plant, and this DNA integrates into the plant’s genome, causing the production of tumors and associated changes in plant metabolism.

Genetic engineering techniques are used only when all other techniques have been exhausted, i.e. when the trait to be introduced is not present in the germplasm of the crop; the trait is very difficult to improve by conventional breeding methods; and when it will take a very long time to introduce and/or improve such trait in the crop by conventional breeding methods (see Figure 2). Crops developed through genetic engineering are commonly known as transgenic crops or genetically modified (GM) crops.

Modern plant breeding is a multi-disciplinary and coordinated process where a large number of tools and elements of conventional breeding techniques, bioinformatics, molecular genetics, molecular biology, and genetic engineering are utilized and integrated.

Although there are many diverse and complex techniques involved in genetic engineering, its basic principles are reasonably simple. There are five major steps in the development of a genetically engineered crop. But for every step, it is very important to know the biochemical and physiological mechanisms of action, regulation of gene expression, and safety of the gene and the gene product to be utilized. Even before a genetically engineered crop is made available for commercial use, it has to pass through rigorous safety and risk assessment procedures.

The first step is the extraction of DNA from the organism known to have the trait of interest. The second step is gene cloning, which will isolate the gene of interest from the entire extracted DNA, followed by mass-production of the cloned gene in a host cell. Once it is cloned, the gene of interest is designed and packaged so that it can be controlled and properly expressed once inside the host plant. The modified gene will then be mass-produced in a host cell in order to make thousands of copies. When the gene package is ready, it can then be introduced into the cells of the plant being modified through a process called transformation. The most common methods used to introduce the gene package into plant cells include biolistic transformation (using a gene gun) or Agrobacterium-mediated transformation. Once the inserted gene inserted stable, inherited, and expressed in subsequent generations, then the plant is considered a transgenic. Backcross breeding is the final step in the genetic engineering process, where the transgenic crop is bred and selected in order to obtain high quality plants that express the inserted gene in a desired manner.

Genetic Engineering and Society, Lecture 18a, Honors 70A