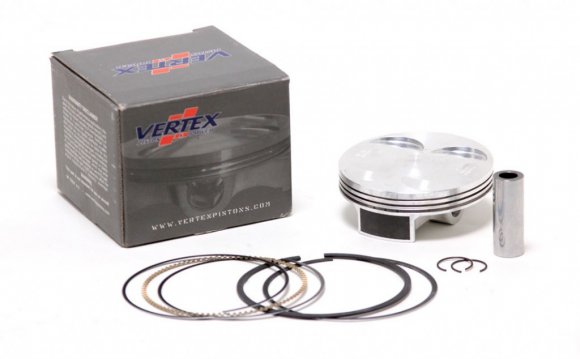 1. The first step, called Intake stroke, is to get the air-fuel mixture into the cylinder. Mixture enters through an inlet port that is opened and closed by an inlet valve.

2. Second step is known as compression stroke. Here the piston compresses the air-fuel mixture into a smaller volume.
Just before the third stroke, the expansion stroke, a spark is produced across the electrodes of a spark plug.

3. In the expansion stroke, the fuel is ignited by the spark produced by the spark plug and burns. This burning, called combustion, makes the gases expand rapidly, and push the piston down the cylinder until it reaches bottom dead center. The reciprocating action of the piston induces rotational inertia (Moment of Inertia) into the crankshaft.

4. In the fourth stroke, called the exhaust stroke, the crankshaft forces the piston back up the cylinder, pushing leftover gases out past an exhaust valve. And everything is back where it started, ready to repeat the whole process.

The whole process is a cycle. A new mixture enters and is ignited. Combustion occurs, expanding gases drive the piston down and turn the crankshaft which pushes the piston back up the cylinder. These 5 events occur in all internal combustion engines. How they happen can change but they are always there. In one 4-stroke cycle, the crankshaft does 2 revolutions, and the piston makes 4 strokes in these 2 revolutions. In one 4-stroke cycle, only 1 stroke out of 4 delivers new energy to turn the crankshaft. The remaining four strokes, besides not producing any energy, consumes a lot of energy produced in the expansion stroke. This is one of the main reasons for the low efficiencies of IC Engines. A 4-stroke gasoline engine uses internal combustion, meaning that the heat that causes the air in the cylinder to expand is generated inside the cylinder. By comparison, a steam engine produces its heat in a furnace and boiler outside the engine cylinder so it is an external combustion engine. The four strokes must include the five key events common to all internal combustion engines - Intake, Compression, Ignition, Power, & Exhaust. Intake: Taking in air-fuel mixture The intake stroke starts with the exhaust valve closed, the inlet valve opening, and the piston at its highest point, top dead center. As it moves down, it increases the volume above the top of the piston. This makes pressure inside the cylinder lower than the pressure outside. This higher outside air pressure forces the air-fuel mixture into the cylinder. The piston reaches bottom dead center, the inlet valve closes, and the intake stroke ends. Compression: Squeezing the air-fuel mixture into a smaller volume Both intake and exhaust valves stay closed as the piston leaves bottom dead center. The piston moves up, squeezing the air-fuel mixture into a smaller and smaller volume, which compresses it. That causes the air/fuel charges temperature to rise, and that makes ignition easier and combustion (burning of fuel) more complete. Ignition and Power: Burning the air-fuel mixture and forcing the piston down Just before the piston reaches top dead center, the next key event occurs - Ignition. The air-fuel mixture explodes and as it expands it pushes the piston down the cylinder. This is the Power stroke that drives the engine. Exhaust: Getting rid of the burnt gases.The piston now moves from bottom dead center to top dead center. The exhaust valve opens, and the piston pushes out the leftover gases. Remember, the intake valve is only open during the intake stroke, and the exhaust valve is only open during the exhaust stroke. Both are closed during the compression and power stokes.