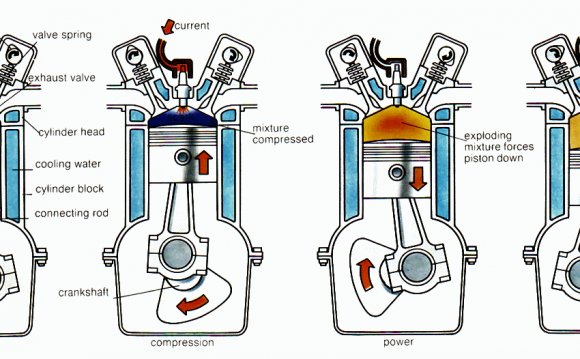 This is an animated computer drawing of one cylinder of the Wright brothers' 1903 aircraft engine. This engine powered the first, heavier than air, self-propelled, maneuverable, piloted aircraft; the Wright 1903 Flyer. The engine consisted of four cylinders like the one shown above, with each piston connected to a common crankshaft. The crankshaft was connected to two counter-rotating propellers which produced the thrust necessary to overcome the drag of the aircraft.

The brothers' design is very simple by today's standards, so it is a good engine for students to study to learn the fundamentals of engine operation. This type of internal combustion engine is called a four-stroke engine because there are four movements (strokes) of the piston before the entire engine firing sequence is repeated. The four strokes are described below with some still figures to describe the engine operation. In the animation and in all the figures, we have colored the fuel/air intake system red, the electrical system green, and the exhaust system blue. We also represent the fuel/air mixture and the exhaust gases by small colored balls to show how these gases move through the engine. Since we will be referring to the movement of various engine parts, here is a figure showing the names of the parts:

The engine cycle begins with the intake stroke as the piston is pulled towards the crankshaft (to the left in the figure).

The intake valve is open, and fuel and air are drawn past the valve and into the combustion chamber and cylinder from the intake manifold located on top of the combustion chamber. The exhaust valve is closed and the electrical contact switch is open. The fuel/air mixture is at a relatively low pressure (near atmospheric) and is colored blue in this figure. At the end of the intake stroke, the piston is located at the far left and begins to move back towards the right.

The cylinder and combustion chamber are full of the low pressure fuel/air mixture and, as the piston begins to move to the right, the intake valve closes.

Historical note - The opening and closing of the intake valve of the Wright 1903 engine was termed "automatic" by the brothers. It relies on the slightly lower pressure within in the cylinder during the intake stroke to overcome the strength of the spring holding the valve shut. Modern internal combustion engines do not work this way, but use cams and rocker arms like the brothers' exhaust system. Cams and rocker arms provide better control and timing of the opening and closing of the valves.

With both valves closed, the combination of the cylinder and combustion chamber form a completely closed vessel containing the fuel/air mixture. As the piston is pushed to the right, the volume is reduced and the fuel/air mixture is compressed during the compression stroke.

During the compression, no heat is transferred to the fuel/air mixture. As the volume is decreased because of the piston's motion, the pressure in the gas is increased, as described by the laws of thermodynamics. In the figure, the mixture has been colored yellow to denote a moderate increase in pressure. To produce the increased pressure, we have to do work on the mixture, just as you have to do work to inflate a bicycle tire using a pump. During the compression stroke, the electrical contact is kept opened. When the volume is the smallest, and the pressure the highest as shown in the figure, the contact is closed, and a current of electricity flows through the plug.