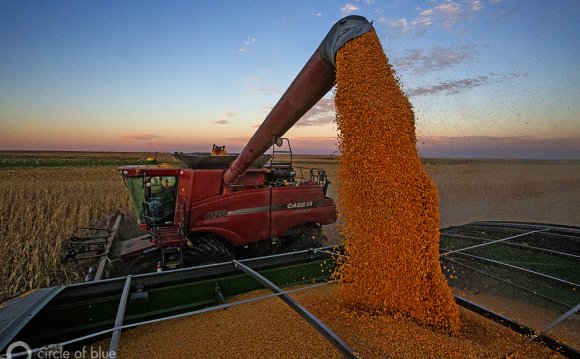 Kansas is known as the "Wheat State" and "Breadbasket of the World." Farming has been a way of life in Kansas, impacting its politics, laws, innovations, culture, social customs, and traditions. The economy relies on many agricultural businesses including those related to storing, transporting, and processing farm products.

Some of the earliest people to live in this area were gardeners. In addition to hunting for game, early people gathered and ate wild plants. The best seeds were saved and planted in soil near their homes, beginning the tradition of farming. Usually the role of women, these people used buffalo bones as tools to plant and harvest crops. Corn, beans, squash, pumpkins, and sunflowers, were grown and harvest was stored underground in pits. Plantings would often occur in the spring just before families headed west for the hunting season. They would return from hunting in time for harvest.

Settlers from the eastern United States and from European countries brought farming traditions when Kansas was opened to settlement in 1854. These people often brought seeds of the crops they had planted in their homelands. Farmers planted corn for eating and for forage and also experimented with oats, cotton, tobacco, and even grapes in vineyards. These crops did not fare as well in the Kansas climate.

The grasshopper plague of 1874 and subsequent droughts led to the decline of corn in Kansas. Mennonite settlers arriving from Russia were accustomed to growing wheat in a prairie climate. They found success with wheat in Kansas and encouraged other farmers to plant it here thereby helping to create the wheat-state tradition. As wheat grew in popularity, technology advanced, making it possible to work larger areas in shorter periods of time.

"The harvesting of the extensive areas of wheat, " said a Kansas farmer in 1880, "presents a picture of unique and fascinating interest. The pastoral old 'cradling' process is here superseded by an epic; the plentiful reaping-machine . . . leaves the wheat lying behind it in a swath . . .next the self-raker, which drops it in convenient little bunches, ready for binding, then the header, which clips off only the tips and the stems, emptying them into a large uncouth box on an attendant wagon; and finally the self-binder . . . with a single sinister arm tossing the sheaves from it in such a nervous, spiteful feminine style."

Most farmers wanted to grow crops that they could sell. The standard farm size was 160 acres—too large for farms that provided all their needs, but not quite large enough for commercial ventures. With technological advancements from 1850 to 1930, farming began to be big business in Kansas.

Horse-drawn sulky plows appeared and horses and mules powered the threshers that harvested the crops. Kansas farmers were able to work the large, open prairie with these cultivators, binders, and reapers that replaced manual operations. A single farmer could do the work of several men. With three workhorses pulling a one-bottom walking plow, he could break only about two acres in one day. With a two-bottom plow and a four or five horse-drawn sulky, he could plow five to seven acres.