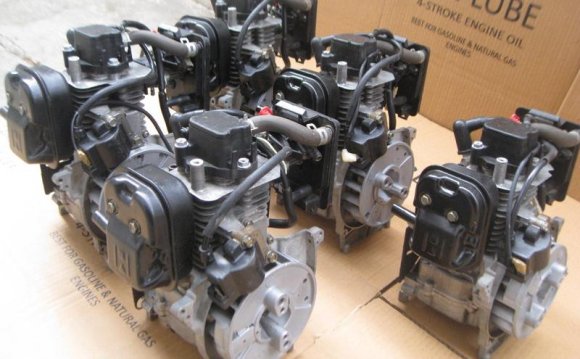 In an internal combustion engine of the reciprocating type, the crankcase is the housing for the crankshaft. The enclosure forms the largest cavity in the engine and is located below the cylinder(s), which in a multicylinder engine is usually integrated into one or several cylinder blocks. Crankcases have often been discrete parts, but more often they are integral with the cylinder bank(s), forming an engine block. Nevertheless, the area around the crankshaft is still usually called the crankcase. Crankcases and other basic engine structural components (e.g., cylinders, cylinder blocks, cylinder heads, and integrated combinations thereof) are typically made of cast iron or cast aluminium via sand casting. Today the foundry processes are usually highly automated, with a few skilled workers to manage the casting of thousands of parts.

A crankcase often has an opening in the bottom to which an oil pan is attached with a gasketed bolted joint. Some crankcase designs fully surround the crank's main bearing journals, whereas many others form only one half, with a bearing cap forming the other. Some crankcase areas require no structural strength from the oil pan itself (in which case the oil pan is typically stamped from sheet steel), whereas other crankcase designs do (in which case the oil pan is a casting in its own right). Both the crankcase and any rigid cast oil pan often have reinforcing ribs cast into them, as well as bosses which are drilled and tapped to receive mounting screws/bolts for various other engine parts.

Besides protecting the crankshaft and connecting rods from foreign objects, the crankcase serves other functions, depending on engine type. These include keeping the motor oil contained, usually hermetically or nearly hermetically (and in the hermetic variety, allowing the oil to be pressurized); providing the rigid structure with which to join the engine to the transmission; and in some cases, even constituting part of the frame of the vehicle (such as in many farm tractors).

A large number of small two-stroke engines use a sealed crankcase as a compression chamber for their mixture. These are hugely common as petrol or gasoline small engines for motorcycles, generator sets and garden equipment. Both sides of the piston are used as working surfaces: the upper side is the power piston, the lower side acts as a scavenging pump. As the piston rises, it pushes out exhaust gases and produces a partial vacuum in the crankcase, which draws in fuel and air. As the piston travels downward, the compressed fuel/air charge is pushed from the crankcase into the cylinder.

Unlike larger engines, the crankcase does not contain only engine oil because it handles the fuel/air mixture. Instead, oil is mixed in with the fuel supply as petroil, and this mixture provides splash lubrication for the cylinder walls, crankshaft and connecting rod bearings. Using ball or roller bearings for the bearings in such engines has always been more common than the oil-fed plain bearings used for other engines, as these are more amenable to using this oil mist lubrication. These engines have been used in larger sizes for small cars. They were considered in the 1980s as more fuel efficient engines for larger cars, but the increased interest in engine emissions at this time prevented their use: mixing their lubricating oil into the engine's intake mixture gave high HC emissions and this problem was not overcome.

Small diesel engines may also use this type of crankcase compression. Such engines are still uncommon, compared to petrol engines, but they are used for generators and industrial equipment and are becoming available for diesel motorcycles.

Very large slow-speed two-stroke diesel engines, such as those in ships, may have their crankcase as a separate space from the cylinders, or as an open crank. The piston rod is supported by a separate crosshead. The spaces between the piston rod and the crosshead, or the crosshead to the crankshaft, may be largely open for maintenance access. As they are large and their movement is slow, the bearings may be made individually well enough sealed to catch and return the oil from the bearings.

Oil circulation is kept separate from the fuel/air mixture, thereby preserving oil rather than burning it as happens in two-stroke engines. Oil moves from its reservoir, is pressurized by an oil pump, and is pumped through the oil filter to remove grit. The oil is then squirted into the crankshaft and connecting rod bearings and onto the cylinder walls, and eventually drips off into the bottom of the crankcase. In a wet sump system, oil remains in a reservoir at the bottom of the crankcase, referred to as the oil pan. In a dry sump system, oil is instead pumped to an external reservoir.

Even in a wet sump system, the crankshaft has minimal contact with the sump oil. Otherwise, the high-speed rotation of the crankshaft would cause the oil to froth, making it difficult for the oil pump to move the oil, which can starve the engine of lubrication. Small amounts of oil may splash onto the crankshaft during rough driving, referred to as windage.

In a wet sump system, the main dipstick reaches to near the bottom of the crankcase. The oil filler cap covers a hole in the crankcase where oil can be added; it is typically located on the top of the rocker cover (or if two, the one closer to the front of the vehicle).

During normal operation, a small amount of unburned fuel and exhaust gases escape around the piston rings and enter the crankcase, referred to as "blow-by". If these gases had no controlled escape mechanism, the gasketed joints would leak (as they "found their own way out"); also, if the gases remained in the crankcase and condensed, the oil would become diluted and chemically degraded over time, decreasing its ability to lubricate. Condensed water would also cause parts of the engine to rust. To counter this, a crankcase ventilation system exists. In all modern vehicles, this consists of a channel to expel the gases out of the crankcase, through an oil-separating baffle, to the PCV valve, into the intake manifold. In a non-turbo engine, the intake manifold is at a lower pressure than the crankcase, providing the suction to keep the ventilation system going. A turbo engine usually has a check valve somewhere in the tubing to avoid pressurizing the crankcase when the turbo produces boost.

If an engine is damaged or enters old age, gaps can form between the cylinder walls and pistons, resulting in larger amounts of blow-by than the crankcase ventilation system can handle. The gaps cause power loss, and ultimately mean that the engine needs to be rebuilt or replaced. Symptoms of excessive blow-by include oil being pushed up into the air filter, out the dipstick, or out the PCV valve. In rare cases of serious piston or ring damage, the oil filter housing's sheet metal can even burst at its seam.

Gardner 0 open-crank stationary engine.
The connecting rod is enclosed with a simple plate above, as a safety guard rather than an enclosed crankcase.

Early engines were of the "open-crank" style, that is, there was no enclosed crankcase. The crankshaft, connecting rod, camshaft, gears, governor, etc. were all completely exposed and could be viewed in operation when the engine was running. This made for a messy environment, as oil was thrown from the engine and could run on the ground. Another disadvantage was that dirt and dust could get on moving engine parts, causing excessive wear and possible malfunction of the engine. Frequent cleaning of the engine was required to keep it in normal working order.