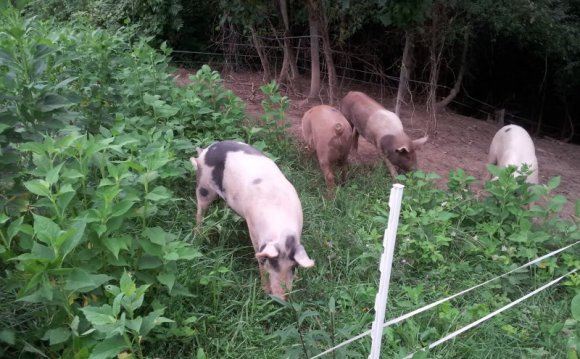 What do our nation's farms and chemical manufacturing labs have in common? Well, for some pig factory farms in America, more than you might expect.

Pigs poop-a lot. And when you concentrate huge numbers of pigs inside one building, you get a huge amount of poop. Yet collecting so much of that waste in one place and storing it there doesn't just create foul odors-it can create fatal odors that, similar to the impact of chemical or biological accidents or weapons, can kill anyone exposed to them.

Instead of mustard gas, think of it more like manure pit gas.

Because of the irresponsibility of an Iowa factory farmer, more than 1, 000 animals recently perished from that very manure pit gas which had built up underneath the confinement operation in which they were trapped for their whole lives. They were forced to endure the concentrated, toxic vapors of their own waste until their bodies simply could no longer take it.

The pigs' corpses filled 17 dump trucks, which hauled them to a mass grave at a landfill. It took three days to inter them, before the operators finally sealed the animals' bodies off from the world in which, when alive, they knew only suffering.

Just months earlier, a different Iowa factory farm reported another fatal gas incident, though the victims in this case weren't pigs, but rather a father and his son. And earlier this year, the same tragedy befell another father and son.

When Iowa passed its ag-gag law three years ago, essentially preventing whistleblowing at factory farms, these were exactly the type of problems the nation's largest pork-producing state wanted to keep hidden. When a system of farm animal confinement is so extreme that animals and humans alike are dying such horrible deaths, you know there's something rotten going on. When people have to work around such unnatural concentrations of manure that they risk death simply by showing up to their farm and breathing, you know it's time to clear the air.

By forcing vast numbers of animals to live shoulder to shoulder, suspended above putrid pits of their own waste, the factory farming system's moral bankruptcy becomes even more clearly illustrated. As former President George W. Bush's speechwriter Matthew Scully writes, "The factory farms - producing almost every animal product we see sold or advertised, in our country and most others - are places of immense and avoidable suffering."

You know an industry has much to hide when it wants to criminalize documenting its everyday operations. And, if there was any question before, these recent deaths make it clearer than ever just why Iowa wanted its ag-gag law so much.

Our nation's farms should be wholesome places. The fact that some have become more like weapons labs-and that states like Iowa want to keep this hidden from Americans-is a sign that the time for reform of the factory farming model is long overdue.