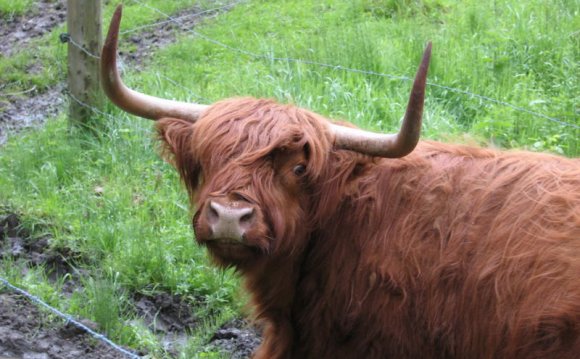 An animal pound was a place where stray livestock such as pigs are impounded in a dedicated enclosure until claimed by their owners or sold to cover the costs of impounding.

The terms "pinfold" and "pound" are Saxon in origin. "Pundfald" and "pund" both mean an enclosure. There appears to be no difference between a pinfold and a village pound. The term pinfold seems to be more popular in the north and east of England, whilst in the south and west the term pound is more popular.

The Village pound was a feature of most English medieval villages, and they were also found in the English colonies of North America.

A high-walled and lockable structure served several purposes; the most common use was to hold stray sheep, pigs and cattle until they were claimed by the owners, usually for the payment of a fine or levy. The pound could be as small as 225 square feet (20.9 m2) or as big as half an acre and may be circular or square. Early pounds had just briar hedges, but most were built in stone or brick, making them more stock-proof. The size and shape of village pounds varies, some are four sided: rectangular, square and irregular, others are circular. In size they vary from a few square metres to over 0.5 ha. Pounds are known to date from the medieval period. By the 16th century most villages and townships would have had a pound. Most of what remains today would date from the 16th and 17th centuries. Some, like Tockholes Pinfold in Lancashire, are listed buildings, but most have fallen into disrepair. Another well preserved pound can be found in Northfield, Birmingham. Alfrick Pound is a village in Worcestershire with a well preserved village pound. As the pound in Totteridge Village London. There are also examples in other countries. "There was hardly a town in eighteenth-century New England without its town pound..."

"Nearly every village once had its pound for stray cattle, pigs, geese, etc. to be driven into and there kept at the expense of the owner, till such time as he should pay the fine (the amount claimed by the person on whose land they had strayed, for damage done), and the fee to the pound keeper, man or sometimes woman, for feeding and watering the same.

If not claimed in three weeks, the animals were driven to the nearest market and sold, the proceeds going to the impounder and pound-keeper. An ingenious form of receipt was sometimes used. The person who found the animals on his land cut a stick and made notches, one for every beast, and then split the stick down the centre of the notches so that half each notch appeared on each stick; one half he kept, the other he gave to the pound-keeper.

When the owner came to redeem his property and had paid for the damage done, the impounder gave him his half stick. He took this to the pound-keeper, and if the two pieces tallied, it proved he had paid and his beast was freed. Hence the word tally-stick and the pound-keeper being referred to as the tallyman".

In some mountainous areas of northern Spain (such as Cantabria or Asturias) some similar enclosures are traditionally used to protect bee hives from bear attacks.

The artist Andy Goldsworthy has produced a series of sculptures in several of the pinfolds in Cumbria.

Meet a CSIR waste management researcher who specialises in ...