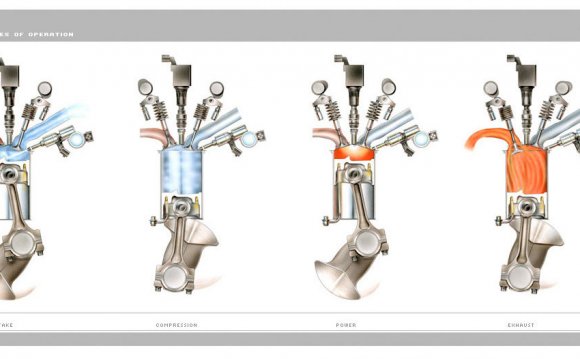 Just in case some of you aren’t sure how two-stroke engines work, here is some review. In a four-stroke engine, each of the four essential steps of the power-producing cycle is given its own piston stroke:

A two-stroke performs all the same steps, but in just two piston strokes. The simplest two-strokes do this by using the crankcase and the underside of the moving piston as a fresh charge pump. Such engines carry the official name “crankcase-scavenged two-strokes.”

As the two-stroke’s piston rises on compression, its underside pulls a partial vacuum in the crankcase. An intake port of some kind (cylinder wall port, reed valve or rotary disc valve) opens, allowing air to rush into the crankcase through a carburetor.

As the piston nears Top Dead Center, a spark fires the compressed mixture. As in a four-stroke, the mixture burns and its chemical energy becomes heat energy, raising the pressure of the burned mixture to hundreds of psi. This pressure drives the piston down the bore, rotating the crankshaft.

As the piston continues down the bore, it begins to expose an exhaust port in the cylinder wall. As spent combustion gas rushes out through this port, the descending piston is simultaneously compressing the fuel-air mixture trapped beneath it in the crankcase.

As the piston descends more, it begins to expose two or more fresh-charge ports, which are connected to the crankcase by short ducts. As pressure in the cylinder is now low and pressure in the crankcase higher, fresh charge from the crankcase rushes into the cylinder through the fresh-charge (or “transfer”) ports. These ports are shaped and aimed to minimize direct loss of fresh charge to the exhaust port. Even in the best designs, there is some loss, but simplicity has its price! This process of filling the cylinder while also pushing leftover exhaust gas out the exhaust port is called “scavenging.”

While the piston is near Bottom Dead Center, mixture continues to move from the crankcase, up through the transfer ports, and into the cylinder.

As the piston rises, it first covers the transfer ports, leaving only the exhaust port still open. If there were no way to stop it, much of the fresh charge would now be pumped out the exhaust.

Because fuel-air mixture is constantly being pumped by the crankcase, it is not practical to lubricate piston and crank by pumped circulating oil—it would be swept away by the mixture rushing in and out. Therefore, we must either mix a little oil with the fuel (2 to 4 percent) or inject it very sparingly into the bearings with a tiny metering pump. The fact that there is so little oil dictates that such simple two-strokes must employ rolling bearings, whose need for oil is very small.

More complicated two-stroke engines exist. Instead of using the crankcase and underside of the piston as a fresh-charge pump, we can use a separate rotary blower, directly connected to the transfer ports in the cylinders. We don’t have to place the exhaust port in the cylinder wall—it can take the form of four overhead poppet exhaust valves, as it does in two-stroke marine, rail, and truck diesels. Because such engines do not use their crankcases as fresh charge pumps, they can employ long-lasting plain bearings, lubricated conventionally by pumped recirculating oil.

Two-stroke diesels are scavenged with pure air, not a fuel-air mixture. Their fuel is injected only after all ports have closed, preventing any loss. Certain crankcase scavenged two-strokes do the same, and are called “DI, ” or Direct Injection two-strokes. They can be made as fuel-efficient and low in exhaust emissions as four-strokes.

The world’s most efficient piston engines are in fact the giant, slow-turning marine diesels that carry the world’s international shipping trade—they are twice as efficient as the usual four-stroke spark-ignition engines found in cars and motorcycles.

How a 4 stroke car engine works