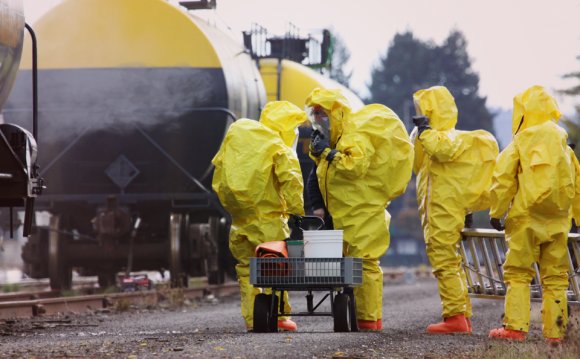 Hazardous wastes are poisonous byproducts of manufacturing, farming, city septic systems, construction, automotive garages, laboratories, hospitals, and other industries. The waste may be liquid, solid, or sludge and contain chemicals, heavy metals, radiation, dangerous pathogens, or other toxins. Even households generate hazardous waste from items such as batteries, used computer equipment, and leftover paints or pesticides.

The waste can harm humans, animals, and plants if they encounter these toxins buried in the ground, in stream runoff, in groundwater that supplies drinking water, or in floodwaters, as happened after Hurricane Katrina. Some toxins, such as mercury, persist in the environment and accumulate. Humans or animals often absorb them when they eat fish.

The rules surrounding hazardous waste are overseen in the U.S. by the federal Environmental Protection Agency (EPA) as well as state departments of environmental protection. EPA requires that hazardous waste be handled with special precautions and be disposed of in designated facilities located throughout the United States, which charge for their services. Many towns have special collection days for household hazardous waste.

A common hazardous waste facility is one that stores the waste in sealed containers in the ground. Less toxic waste that is unlikely to migrate, like soil with lead, is sometimes allowed to remain in place under the ground and then be sealed with a cap of hard clay. Communities may eventually decide to use these sites for golf courses or parks, or to label them “brownfields” sites, suitable for commercial or industrial uses.

Violations, like dumping hazardous waste in town dumps to avoid paying the fees charged by waste transporters and waste facilities, may result in hefty fines.

EPA began regulating hazardous waste in 1976. Many toxic waste dumps that pose a threat to communities today are holdovers from the era prior to 1976. Other waste sites are the result of more recent illegal dumping.

The federal Resource Conservation and Recovery Act regulates how hazardous waste must be handled and stored. It also lists some but not all of the wastes that EPA considers hazardous. Substances that are not on the list but are toxic are also considered hazardous waste and subject to EPA’s rules. The Superfund Act contains rules about cleaning up hazardous waste that was dumped illegally.

Communities and environmentalists have long complained about lax enforcement of hazardous waste regulations, both by the federal government and state governments. Meanwhile, many corporations argue the regulations are too strict and lobby Congress to soften or remove certain rules.