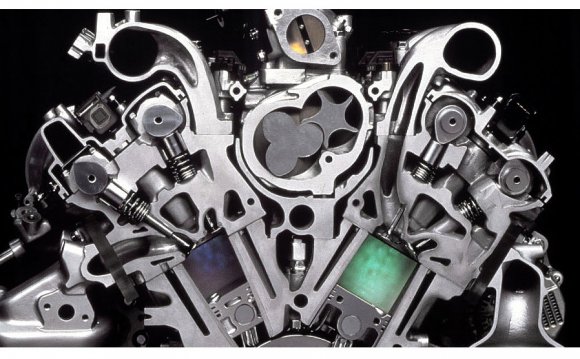 Let’s start by stating the obvious: Apparently, the “Atkinson Cycle” and “Miller Cycle” names are not trademarked since neither is true to its original patents when it comes modern Otto engines. Of the two engines, the Atkinson is the more significantly changed. From this animation of the original/genuine Atkinson Cycle engine by Bill Todd at douglas-self.com, it’s quite obvious that this complex mechanical dance is not what’s taking place under the hoods of millions of the Toyota and other hybrid cars claiming to use an Atkinson cycle engine. Indeed, a key aspect of James Atkinson’s 1882 engine design is being employed, but in a much simpler form.

Initially, Atkinson wasn’t searching so much for greater efficiency, but for a way to circumvent patents for four-cycle engines that had been awarded to Otto. His solution was to design an engine whose crankshaft rotated only once once per the four strokes. The very complicated (not to mention mechanically complex and inefficient) “crankshaft” that allowed this also made possible a power stroke longer than the compression stroke, and the key to potentially greater efficiency.

But the original Atkinson Cycle engine was built only in very small numbers, obviously mostly due to its mechanical complexity and high cost.

Looking for maximum efficiency for their new Prius, Toyota applied the key aspect of the Atkinson Cycle engine to their conventional 1.5-liter four and then adapted it by delaying the closing of the intake valves during the compression stroke. Since the combustion chamber is proportionately smaller, combustion pressures at ignition are comparable with a conventional four-stroke. Toyota also optimized (delayed) the engine’s exhaust valve timing in order to maximize the expansion stroke.

The large throttle opening produces both lower manifold vacuum and reduced pumping loss. The Atkinson Cycle is very efficient within a defined operating range (around 2500 – 4000 rpm in an automotive engine), but substantially reduced torque makes it largely unsuitable in a conventional drive train. However, full-hybrid systems like Toyota’s HSD fully mask that deficiency, and can achieve near-diesel efficiency when the engine is the primary power source.

The Miller Cycle engine was patented in 1957 by Ralph Miller. It describes “a new and improved method of operating a supercharged, intercooled engine” (including two- and four-strokes) by utilizing a servo-operated compression control valve in the cylinder head.

Today’s Miller Cycle engines actually are supercharged Atkinson Cycle engines, as Toyota and others recognize. The use of a mechanically-driven, positive displacement supercharger overcomes the torque deficiency of the Atkinson engine, and the delayed compression stroke, lowers the charge air temperature well below that of a typically boosted engine, thus allowing a higher compression ratio and greater ignition advance.

Of course, there are mechanical losses associated with superchargers (turbos don’t provide the immediate boost required), which probably explains why the Miller Cycle engine hasn’t enjoyed wider use. The Mazda Millenia (its engine is pictured above) ended up making only 10 more horsepower than Mazda’s conventional 2.5-liter V6, yet did so at considerably more expense. Of course, today’s variable valve technologies makes the possibilities for incorporating various elements of Atkinson/Miller Cycle function much more feasible.