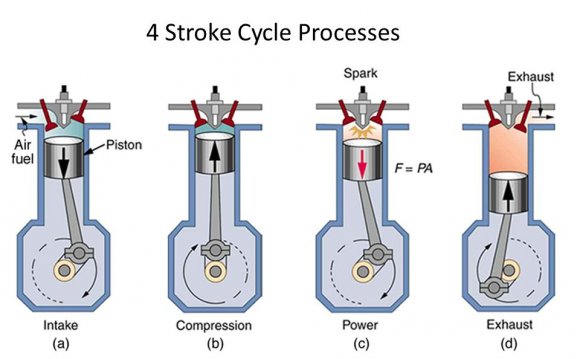 Which is Better, a 2 Stroke or 4 Stroke Engine?

Every website you look at regarding 2 stroke and 4 stroke engines seems to make a list comparing the pros and cons of each engine. But is such a list really fair or just a comparison between a cheaply made 2 stroke and an expensive 4 stroke that has had lots of time and research put into it?

How the Engines Work

"Stroke" refers to the movement of the piston in the engine. 2 Stroke means one stroke in each direction. A 2 stoke engine will have a compression stroke followed by an explosion of the compressed fuel. On the return stroke new fuel mixture is inserted into the cylinder.

A 4 stroke engine usually has a distributor that supplies a spark to the cylinder only when its piston is near TDC (top dead center) on the fuel compression stroke, ie. one spark every two turns of the crank shaft. Some 4 stroke engines do away with the distributor and make sparks every turn of the crank. This means a spark happens in a cylinder that just has burnt gasses in it which just means the sparkplug wears out faster.

Michael Harrison from the DeepScience BIGENZ team has this to say:
Most of what is written on advantages and disadvantages of 2 strokes Vs 4 strokes is not actually correct.

Take for example the lubrication issue of 2 stroke engines, sure small chainsaw engines may have the oil mixed with the fuel but this is not a direct result of the engine being a 2 stroke, this is just a result of someone designing a very simple engine. look at any large Caterpillar, or Detroit 2 stroke they have conventional oil sumps, oil pumps and full pressure fed lubrication systems and they are 2 stroke!

Also, the argument about valves of 4 strokes versus the reeds and ports of 2 strokes is also incorrect. Sure some simple 2 strokes may use very primative systems to achieve the conrol of fuel/air mixture into the engine and exhaust out of the engine but again this is not a function of them being 2 stroke! I've worked on 2 stroke engines that feature poppet valves in the head (like a standard 4 stroke) - but they are definately 2 stroke - it's just that engines like this are not so much in the public eye - next time an ocean liner (ship) pulls into port check out its 2 stroke, turbo charged, direct injected diesel engine!

Finally, the arguments of simplicity, weight, power to weight, and cost of manufacturing are not a function as such of 2 stroke versus 4 stroke engines. The mistake of most of these commentaries is that they are comparing a simple chainsaw 2 stroke engine with a complex 4 stroke engine from a automobile - not a very fair comparision.

As far as the exhaust emmisions of 2 strokes - check out the Surrich/Orbital 2 stroke design that Mercury outboards are using - this is as clean burning as any 4 stroke.

The ONLY correct comparison of 2 strokes with 4 strokes is that a 2 stroke can (in theory) produce twice the power of a 4 stroke for the same sized engine and the same revs.

On the highly venerated and awesome TV show, Scrapheap Challenge, at least one episode showed an animation that compared the operation of 2 stroke and 4 stroke engines. Unfortunately it looks like the animator didn't quite understand what was going on and ended up showing the same 2 stroke animation for both except that the 2 stroke animation was played twice as fast. One response defending the animation suggested it was because "that particular 4 stroke engine does fire the spark plug once every revolution."

Michael, however, dismisses that idea saying, "As for the diagram [in the Snowmobiles episode of Scrapheap Challenge] - sure small 4 stroke engines do tend to 'waste fire' the spark plug at the end of the exhaust stroke but this would not cause an explosion as depicted in the diagrams, but again here the idea of 'waste firing' has nothing to do with the 4 stroke cycle, rather it is a result of the simple design of a lawnmower motor. The diagrams should depict the inherant differances of a 2 stroke and 4 stroke engine. Hence one should show a firing every revolution and the other a firing every 2 revolutions."

So Which is Better?

At the end of the day the winner is probably going to be the one that has had more money and technology spent on it. In these days of quick and cheap international production schedules you can't take it for granted that the 4 stroke will be better. So for your particular application, line up the options and make a decision based on what's available, not based on lists that miss the key points of difference.