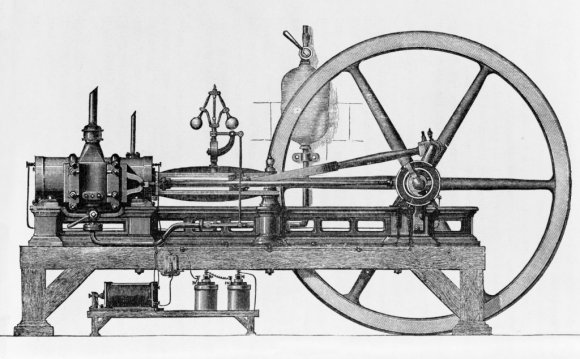 The French inventor, Jean-Joseph-Étienne Lenoir was born at Mussy-la-Ville, Belgium, on January 12, 1822. He was a self-taught chemist and appliedhis expertise to a variety of inventions. He is best known as the first person to develop a practical internal combustion engine and an automobile poweredby it. Before Lenoir's time, external combustion engines were used to propelroad vehicles. Nicholas-Joseph Cugnot drove a steam carriage in 1769, and Samuel Brown of England drove a car that used hydrogen gas in an external combustion engine sometime in the early to mid-1820s. By the 1830s, steam carriages were in wide use, but steam engines had several drawbacks. They were very inefficient, cumbersome, and rather dangerous-prone to explosions and settingfires along roadsides.

Many innovators realized the advantages of an engine in which the combustionof fuel would take place directly within the cylinder and the resulting explosion would drive a piston . The concept of an internal combustion engine hadbeen worked out by French physicist, Nicolas Carnot (1796-1832) and publishedin 1824 in his book on thermodynamics. A practical internal combustion engine was not possible until later in the century when petroleum products becamewidely available.

Claims for the development of the first internal combustion engine have beenmade by supporters of the Reverend W. Cecil and William Barnett, but it was Lenoir, in 1859, who built the first practical engine. Lenoir's model was a two-cycle, one-cylinder engine with slide valves which used "illuminating gas"(also called coal gas) as a fuel. This gas was used at the time in streetlights, hence its name. Lenoir's engine used an electrical charge supplied by a battery to ignite the gas after it was drawn into the cylinder.

Although Lenoir adapted an improved engine to a carriage in 1863, his two-cycle engine was too small and inefficient to power a carriage successfully. Healso adapted his engine to propel a boat, but its true value was realized bythe sale of hundreds to power small machinery, such as printing presses, lathes, and water pumps.

Lenoir is also credited with inventing the spark plug for automobile ignitionsystems. His invention is essentially the same as those used in cars today.Despite his inventions and the acclaim they gained for him during his lifetime, Lenoir died a poor man at Varenne-St. Hilaire, France, on August 4, 1900.