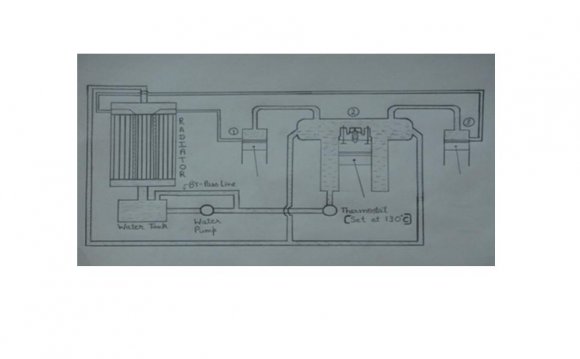 It is a known fact that the two basic engine types, internal combustion engine and external combustion engine are individually not very efficient, as neither of them has efficiency greater than 40%. This is because of the fact that when a fossil fuel burns, the energy is released in the form of heat and explosion but none of the above mentioned engines are able to utilize both these forms for producing useful output. Hence if the working of these two engines is integrated then there is a scope of producing an engine that is highly efficient & effective.

An important point to note is increasing the coolant temperature passing through cylinder block reduces the fuel consumption and hydrocarbon emissions and approximately 30% of the energy produced, by burning of fuel, is lost through the cooling system. Thus it becomes very important to trap this energy that goes wasted without doing any useful work.

When fuel is combusted inside the sole IC cylinder, the energy released is used to produce motive power by the piston of IC cylinder-piston arrangement and the heat released, for which water circulation inside the water jackets is taking place, is utilized to propel the pistons of the two external combustion cylinders (cylinder 1 and 3).

This is made possible by changing the setting of thermostat from conventional 93°C to 130°C. As a result the water contained in the water jacket undergoes a ‘phase change’. This causes steam generation to take place at pressure of 2 bars. In order to ensure that steam generation takes place the flow rate of water delivered by the water pump is regulated such that water remains in contact with the wall of engine liner for relatively longer duration so that it can absorb maximum amount of generated heat and undergo phase change in addition of keeping the temperature within combustion chamber under prescribed level.

The generated steam is then diverted in the space above the pistons of the two EC cylinders where due to the characteristics of ‘vapor pressure’ applies force on the piston to move down.

After pushing the pistons, steam achieves a lower temperature & is exited through ports into a hose that delivers it to the radiator where it condenses to water droplets. Also that portion of water which does not undergo phase change is diverted through another set of hoses, back to the radiator for cooling.

Abhimanyu is inspired by:
The increasing demand of producing efficient engines provides the motive for working in this direction.