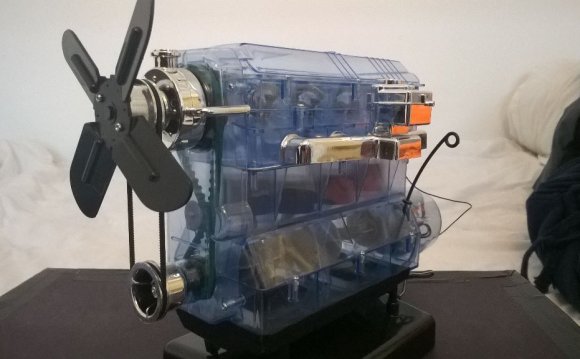 Recently, we decided it was about time we had a new model for testing, training and demonstrations. Specifically, we wanted something that would allow us to test the full capability of the standard tacho channels available on the P8000 systems and the optional advanced tacho card. Ideally, we would have obtained a V8 engine or a small turbine, but neither of these are well suited to an office environment! So, we found the next best thing - a model engine. Specifically, a Haynes model of a four-cylinder petrol engine.

The model is a fairly detailed reproduction of a real engine with working crank, pistons, valves and cam shaft. This meant that we would have plenty of interesting noise & vibration signals to capture and analyze. The model also offered plenty of scope for easy attachment of a rotary encoder. And, because it's driven by a simple electric motor, we could explore the possibilities of 'overclocking' it to get higher and variable speeds.

And then we had to see if it would run...

Look out for more about that in our next post & video.

Chris graduated from Portsmouth Polytechnic in 1983. His interest in software began in the late 1970's when he spent his time typing in and debugging programs on a Sinclair ZX80. Chris is General Manager & Product Development Manager at Prosig where he does management things, leads the product development and works on web, blog, social media & marketing projects. Away from computers he can usually be found clad in lycra pretending to be a cyclist.