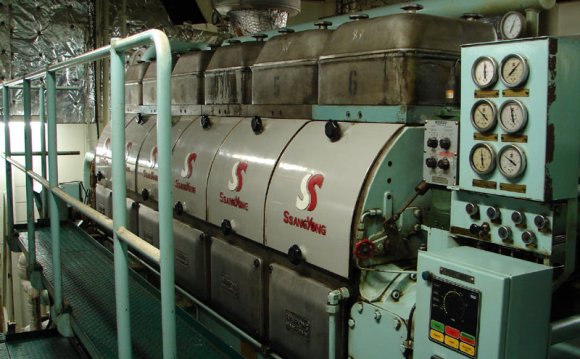 Abstract: In diesel engines, fuel is injected into the engine cylinder near the end of the compression stroke. During a phase known as ignition delay, the fuel spray atomizes into small droplets, vaporizes, and mixes with air. As the piston continues to move closer to top dead center, the mixture temperature reaches the fuel’s ignition temperature, causing ignition of some premixed quantity of fuel and air. The balance of fuel that had not participated in premixed combustion is consumed in the rate-controlled combustion phase.

Diesel engines have an excellent reputation for their low fuel consumption, reliability, and durability characteristics. They are also known for their extremely low hydrocarbon and carbon monoxide emissions. However, they have also been rejected by many for their odorous and sooty exhaust that is also characterized with high nitric oxide and particulate matter emissions. Since performance, fuel consumption, and emitted pollutants result from the combustion process, it is necessary first to understand the mechanisms of combustion in diesel engines if we are to improve it.

Combustion in diesel engines is very complex and until recently, its detailed mechanisms were not well understood. For decades its complexity seemed to defy researchers’ attempts to unlock its many secrets despite the availability of modern tools such as high speed photography used in “transparent” engines, computational power of contemporary computers, and the many mathematical models designed to mimic combustion in diesel engines. The application of laser-sheet imaging to the conventional diesel combustion process in the 1990s was key to greatly increasing the understanding of this process. This paper will review the most established combustion model for the conventional diesel engine to help readers gain an appreciation of diesel combustion and how it impacts performance and emission formation.

The basic premise of diesel combustion is its unique way of releasing the chemical energy stored in the fuel. To perform this process, oxygen must be made available to the fuel in a specific manner to facilitate combustion. One of the most important aspects of this process is the mixing of fuel and air, which is a process often referred to as mixture preparation.

In diesel engines, fuel is often injected into the engine cylinder near the end of the compression stroke, just a few crank angle degrees before top dead center [391]. The liquid fuel is usually injected at high velocity as one or more jets through small orifices or nozzles in the injector tip. It atomizes into small droplets and penetrates into the combustion chamber. The atomized fuel absorbs heat from the surrounding heated compressed air, vaporizes, and mixes with the surrounding high-temperature high-pressure air. As the piston continues to move closer to top dead center (TDC), the mixture (mostly air) temperature reaches the fuel’s ignition temperature. Instantaneous ignition of some premixed fuel and air occurs after the ignition delay period. This instantaneous ignition is considered the start of combustion (also the end of the ignition delay period) and is marked by a sharp cylinder pressure increase as combustion of the fuel-air mixture takes place. Increased pressure resulting from the premixed combustion compresses and heats the unburned portion of the charge and shortens the delay before its ignition. It also increases the evaporation rate of the remaining fuel. Atomization, vaporization, fuel vapor-air mixing, and combustion continue until all the injected fuel has combusted.

Diesel combustion is characterized by lean overall A/F ratio. The lowest average A/F ratio is often found at peak torque conditions. To avoid excessive smoke formation, A/F ratio at peak torque is usually maintained above 25:1, well above the stoichiometric (chemically correct) equivalence ratio. In turbocharged diesel engines the A/F ratio at idle may exceed 160:1. Therefore, excess air present in the cylinder after the fuel has combusted continues to mix with burning and already burned gases throughout the combustion and expansion processes. At the opening of the exhaust valve, excess air along with the combustion products are exhausted, which explains the oxidizing nature of diesel exhaust. Although combustion occurs after vaporized fuel mixes with air, forms a locally rich but combustible mixture, and the proper ignition temperature is reached, the overall A/F ratio is lean. In other words, the majority of the air inducted into the cylinder of a diesel engine is compressed and heated, but never engages in the combustion process. Oxygen in the excess air helps oxidize gaseous hydrocarbons and carbon monoxide, reducing them to extremely small concentrations in the exhaust gas.

The following factors play a primary role in the diesel combustion process: