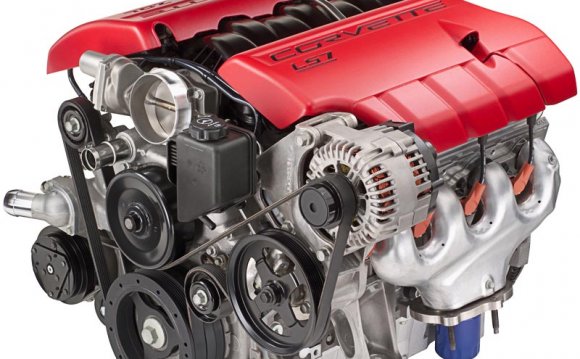 Think back 100 years to a world where people generally got around by walking or riding horses. What changed things? The invention of the car. Wheels may be 5500 years old, but the cars we drive round in today made their debut only in 1885. That was when German engineer Karl Benz (1844–1929) fastened a small gasoline (petrol) engine to a three-wheeled cart and made the first primitive, gas-powered car. Although Benz developed the automobile, another German engineer, Nikolaus Otto (1832–1891), was arguably even more important—for he was the man who'd invented the gasoline engine in the first place, about two decades earlier. It's a testament to Otto's genius that virtually every car engine made ever since has been inspired by his "four-stroke" design. Let's take a look at how it works!

Photo: Car engines turn energy locked in liquid fuel into heat and kinetic energy. They're full of pipes and cylinders because they work like mini chemical plants.

This is the powerful V12 engine on a gloriously restored Jaguar XJS sports car from the late 1970s.

What is a car?

That's not quite such an obvious question as it seems. A car is a metal box with wheels at the corners that gets you from A to B, yes, but it's more than that. In scientific terms, a car is an energy converter: a machine that releases the energy locked in a fuel like gasoline (petrol) or diesel and turns it into mechanical energy in moving wheels and gears. When the wheels power the car, the mechanical energy becomes kinetic energy: the energy that the car and its occupants have as they go along.

Photo: The restored (and nicely polished!) engine in a classic car from the early 1970s.

How do we get power from petroleum?

Cars, trucks, trains, ships, and planes—all these things are powered by fuels made from petroleum. Also known as "crude oil", petroleum is the thick, black, energy-rich liquid buried deep underground that became the world's most important source of energy during the 20th century. After being pumped to the surface, petroleum is shipped or piped to a refinery and separated into gasoline, kerosene, and diesel fuels, and a whole host of other petrochemicals—used to make everything from paints to plastics.