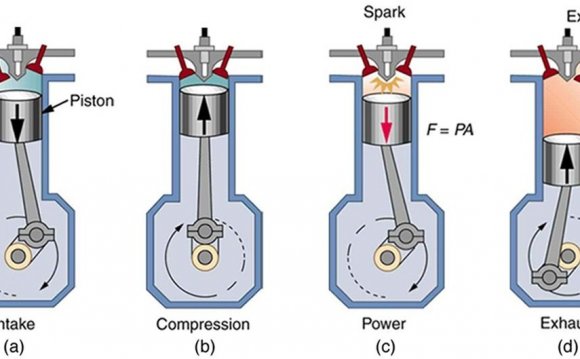 Reciprocating motion, used in reciprocating engines and other mechanisms, is back-and-forth motion. Each cycle of reciprocation consists of two opposite motions: there is a motion in one direction, and then a motion back in the opposite direction. Each of these is called a stroke. The term is also used to mean the length of the stroke.

In a steam locomotive, or in a steam, Otto, Diesel or piston engine, a stroke is the action of a piston travelling the full length of its locomotive cylinder or engine cylinder in one direction.

The stroke length is determined by the cranks on the crankshaft. Stroke can also refer to the distance the piston travels. Engine displacement is dependent on both the diameter of the cylinder, known as its bore, and the stroke of the Piston.

In a pistonless rotary engine, the term is applied to the corresponding rotor movement, see dead centre.

Most modern internal combustion engines work on a four-stroke cycle; that is, a complete cylinder cycle consists of four discrete strokes, as described below. Other types of engines can have very different stroke cycles.

The induction stroke is the first stroke in a four-stroke internal combustion engine cycle. It involves the downward movement of the piston, creating a partial vacuum that draws (allows atmospheric pressure to push) a fuel/air mixture into the combustion chamber.

In a reciprocating engine, it is that portion of the cycle when the pistons move from TDC (top dead center) to BDC (bottom dead center) and the fuel-air mixture is drawn into the cylinders.

This is a cylinder for a 4-stroke Petrol/Gasoline engine. The first step is to get the air-fuel mixture into the chamber. Mixture enters through an inlet port that is opened and closed by an inlet valve. This is called Intake

The compression stroke is the second of four stages in an otto cycle or diesel cycle internal combustion engine.

Compression serves to increase the proportion of energy which can be extracted from the hot gas and should be optimised for a given application. Too high a compression can cause detonation, which is undesirable compared with a smooth, controlled burn. Too low a compression may result in the fuel/air mixture still burning when the piston reaches the bottom of the stroke and the exhaust valve opens.

A power stroke is, in general, the stroke or movement of a cyclic motor while generating force and thus power. It is used in describing mechanical engines. This force is the result of the spark plug igniting the compressed fuel-air mixture (in Petrol Engines).

The exhaust stroke is the fourth of four stages in a |four stroke internal combustion engine cycle. In this stage gases remaining in the cylinder from the fuel ignited during the compression step are removed from the cylinder through an exhaust valve at the top of the cylinder. The gases are forced up to the top of the cylinder as the piston rises and are pushed through the opening, which then closes to allow a fresh air/fuel mixture into the cylinder so the process can repeat itself.