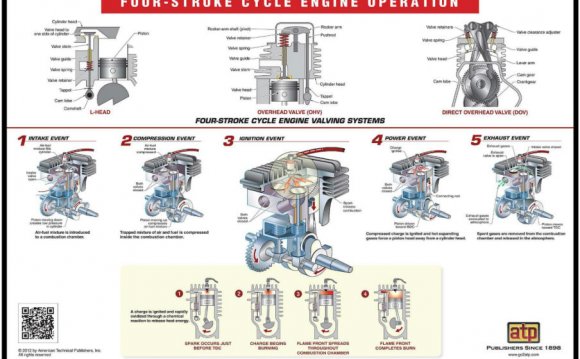 In the intake systems of all 2-stroke cycle diesel engines and some 4-stroke cycle diesel engines, a device, known as a blower, is installed to increase the flow of air into the cylinders. The blower compresses the air and forces it into an air box or manifold, which surrounds or is attached to the cylinders of an engine. Thus, more air under constant pressure is available as required during the cycle of operation.

The increased amount of air, a result of blower action, fills the cylinder with a fresh charge of air. During the process, the increased amount of air helps to clear the cylinder of the gases of combustion. The process is called SCAVENGING. Therefore, the intake system of some engines, especially those operating on the 2-stroke cycle, is sometimes called the scavenging system. The air forced into the cylinder is called scavenge air, and the ports through which it enters are called scavenge ports.

Scavenging must take place in a relatively short portion of the operating cycle; the duration of the process differs in 2- and 4-stroke cycle engines. In a 2-stroke cycle engine, the process takes place during the latter part of the downstroke (expansion) and the early part of the upstroke (compression). In a 4-stroke cycle engine, scavenging takes place when the piston is nearing and passing TDC during the latter part of an upstroke (exhaust) and the early part of a downstroke (intake). The intake and exhaust openings are both open during this interval of time. The overlap of intake and exhaust permits the air from the blower to pass through the cylinder into the exhaust manifold, cleaning out the exhaust gases from the cylinder and, at the same time, cooling the hot engine parts.

When scavenging air enters the cylinder of an engine, it must be so directed that the waste gases are removed from the remote parts of the cylinder. The two principal methods by which this is accomplished are referred to as PORT UNIFLOW SCAVENGING and VALVE UNI-FLOW SCAVENGING. In the uniflow method of scavenging, both the air and the burned gases flow in the same direction. This action causes a minimum of turbulence and improves the effectiveness of the scavenging action. An example of a port uniflow system is shown in figure 6-1. An example of a valve uniflow system is shown in figure 6-2.

Scavenging and supercharging are not common to all diesel engines. For instance, in some 4-stroke cycle engines, the air enters the cylinder...