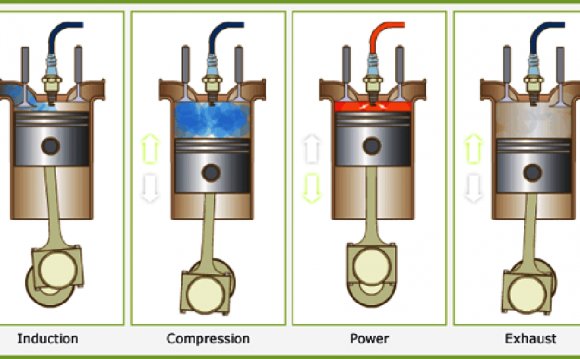 As the piston approaches the top of its stroke within the cylinder, an electric spark jumps across the points of the spark plugs and ignites the compressed fuel-air mixture. This is the ignition event, or event No. 3. The intake and exhaust valves are closed.

Having been ignited, the fuel-air mixture burns. It expands as it burns and drives the piston downward. This causes the crankshaft to revolve. Since it is the only stroke and event that furnishes power to the crankshaft, it is usually called the power stroke, although it is sometimes called the expansion stroke for purposes of instruction. This is event No. 4. The intake and exhaust valves are closed.

The Exhaust or Scavenging Stroke

During the power or expansion stroke, the hot gases obtained by combustion exert tremendous pressure on the piston to force it to move downward, but near the end of the stroke this pressure is greatly reduced because of the expansion of the gases. At this stage, the exhaust valve opens as the crankshaft continues to revolve and the piston is again moved upward in the cylinder by the connecting rod. The burning gases remaining in the cylinder are forced out through the exhaust valve, hence this stroke is usually called the exhaust stroke, although it may be called the scavenging stroke for purposes of instruction. This is event No. 5. One engine cycle has been completed.

This five-event sequence of intake, compression, ignition, power, and exhaust, is a cycle which must take place in the order given if the engine is to operate at all, and it must be repeated over and over for the engine to continue operation.

None of the five events can be omitted, and each event must take place in the proper sequence. For example, if the gasoline supply is shut off, there can be no power event, but the mixture of gasoline and air must be admitted to the cylinder during the intake stroke. Likewise, if the ignition switch is turned off, there can be no power event. Ignition must occur before the power stroke can take place.