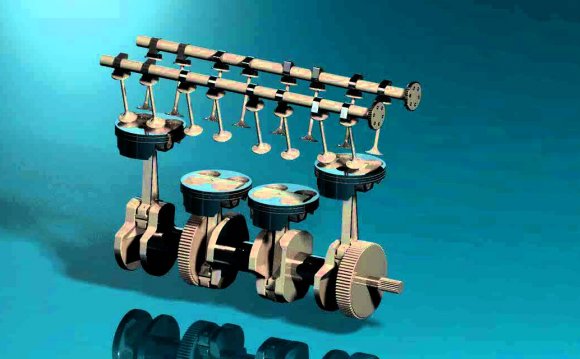 If you have not already, please read “How a Four Stroke Engine Works Part 1”, as it will make it a lot easier for you to understand the four cylinder four stroke, learn more here

As you seen from the four stroke engine part 1, the running of the engine is “timed” by a series of interconnected belts, gears and shafts. In a four cylinder four stroke engine there are four times as many camshafts and valves. All of them have to run perfectly in synch or you will end up with a piston smashing into a valve or a spark plug firing at the wrong time, all of these things can

damage an engine beyond repair – it would be cheaper to buy a new engine than to get one with this sort of damage repaired.

Please be sure you are familiar with the workings of the valves and camshaft from the as i will not be explaining them here, four cylinders would be too complicated to explain as there is enough to learn from one cylinder.

In a four cylinder engine the spark plug timing is controlled by the distributor, this is a rotating arm that makes contact with four pins every time it completes one full revolution ie. it contacts one pin every 90 degrees. There is a potential current in the arm, when it makes contact with one of the pins a circuit is closed and the electricity passes from the arm to the pin, it then travels down a HT (high tension) lead and transports the electricity to the spark plug.

This all has to be timed to occur when a given cylinder is at the top of its stroke – it is about to go from the compression stroke to the power stroke so as to maximize the power transmitted from the expanding fuel/air mixture to the piston. A typical four stroke engine has a firing order of 1, 3, 4, 2. This means that if you were looking at the engine front on, the cylinder furthest to the left (cylinder 1), enters power stroke, then two cylinders over, cylinder 3 enters power stroke, then cylinder four, then cylinder 2 (don’t worry if this sounds confusing, it will be well explained in the video below). All of these firing sequences are controlled and regulated by the valves, timing belts, camshafts and the distributor.

Obviously there is a lot more involved in the working of a four stroke engine,

i haven’t mentioned the cooling system, the electrical system of the lubrication system, but this is just to give a general understanding of the basic working of a four cylinder four stroke, i’ll cover the other systems very soon.