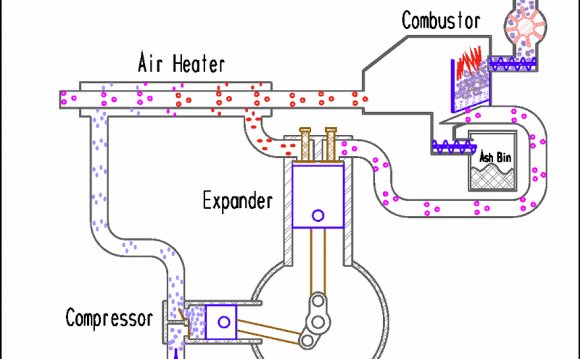 The conventional Internal Combustion Engine, ICE, has been around since 1876 when Nicolaus Otto invented the 4 stroke "Otto"-motor. As soon as it was built Daimler (yes that Daimler) built it into a 2 wheeler - a "motor"-cycle.

A good animation of the can be found at the excellent animated engines site.

With better production methods and cheap fuel (petrol and diesel) the "Otto"-engine won the race and has dominated, were ever there was a need for portable power, for more than a century.

Many designs competed with the "Otto"-motor in the early years and many designs have tried and failed over the years. There are however some specialized niches where the competition has succeeded.

Gas-turbines found their niche in Helicopters and in a few Battle-Tanks. The Jet engines (turbine) and Turboprop engines (essentially a turbine with a propeller attached to the mainshaft)in Aviation. The automotive arena has however been totally dedicated to the 4-stroke Otto-motor.

A notable exception is the Wankel engine which has been produced for automotive application by, at first DKW, then VW and later Mazda for over 50 years. Still in relatively small numbers! I even have a picture of a 70's Chevrolet Corvette prototype utilizing a 3-rotor Wankel engine.

What made, and still makes, the "Otto"-motor so popular is that it:

In addition its characteristics:

This is about to change, hybrid vehicles have different requirements than their mechanical counterparts.

An ICE in a hybrid vehicle is required to produce electricity or hydraulic pressure depending on the drive train technology (traction motors) deployed.

The exception are the serial hybrids. They need to have some of the traditional characteristics intact as the engine is required to supplement the electric traction motors in driving the vehicle and in some applications drive the vehicle fully without electric assistance.

This means the engine is not the only source of power and therefore can be smaller and driven, when it is powered on, in its most efficient operations range - where it gives the most bang (or power) for the buck!

All the variability needed due to terrain or traffic can be handled by the traction motors.

Several of the current hybrid vehicles, vehicles like the and the Prius, use Atkinson cycle engines in stead of the conventional Otto-cycle. See an animation of the again from the excellent animated engines site.

The Atkinson-cycle engine is up to 10% more efficient than a conventional four-stroke petrol "Otto" engine. The increase in efficiency comes mainly from controlling the so called pumping losses.

One reason for diesel "Otto"-engines being more effective than the corresponding petrol engines is because there is no pumping loss in a diesel as power is regulated by injecting less fuel into the cylinders and not by choking the airflow to the cylinders.

The pumping losses in an Atkinson cycle engine are reduced by allowing, in the compression stroke, a small amount of the fuel/air mixture to flow back from the cylinder into the induction system, without being burned, thus reducing the effective displacement of the engine.

Additionally as the expansion ratio of an Atkinson cycle engine is greater than its compression ratio it takes more heat from the exhaust gas instead of pumping it into the exhaust system, thereby achieving additional efficiency.

The Atkinson cycle — also called the "five-stroke cycle" (because of the backflow which is really not a cycle) — works like this: intake, backflow (partial expulsion to eliminate pumping losses), compression, expansion, and exhaust.

The combustion chamber volume is adapted to maintain a constant compression ratio to avoid knock while increasing the expansion ratio to optimize efficiency.

In the case of the engineers convert the Zetec I-4 engine to an Atkinson cycle by changing the intake camshaft to one with a very late valve closing and installing pistons that decrease combustion clearance volume. These changes result in a higher, 12.3:1 compression ratio.

There is not much difference between an Internal Combustion Engine that runs on hydrogen compared to an ICE that runs on petrol/gasoline. The main differences are regarding efficiency, emission levels and fuel storage.

Hydrogen has lower energy density and burns faster and hotter than gasoline. So compression ratios can be increased and more air can be mixed with the fuel, resulting in cooler running and lower exhaust emission than a comparable petrol/gasoline ICE.

As most hydrogen engines run lean, air-to-fuel ratio of 30:1 or more, and as hydrogen, which is gaseous, displaces the oxygen in the cylinders, a supercharger is often needed to achieve the required power output. Once the pre-requisites are in place the hydrogen ICE is highly fuel efficient — up to 25% better than conventional petrol/gasoline ICE's.

Hydrogen storage is however an issue. Lower energy density means that hydrogen tanks require more space if a comparable range is to be achieved. Storing hydrogen as a liquid reduces the size but requires that the tanks tolerate high pressure (up to 700 bar / 1000 psi). Because hydrogen is a gas at normal temperatures there is a high risk of explosion if a hydrogen vehicle is involved in an accident. Different methods to slow the release of hydrogen from a ruptured tank are being tested. One of these methods is to store the hydrogen in a kind of metallic matrix or “sponge”.

An iron sponge can be used as a hydrogen storage material. Hydrogen and „rust" (Fe3O4) are converted into pure iron („iron sponge") which is transported to the hydrogen consumption site. In the reverse reaction (oxidation) „rust" is produced liberating the hydrogen. The iron sponge storage can also be filled/ loaded with synthesis gas (mixture of hydrogen and carbon monoxide) also liberating pure hydrogen in the reverse reaction. Iron sponge storage is in an early stage of development.

Many see the main advantages of the hydrogen ICE in the potential to use it to build momentum for a hydrogen fueling infrastructure and thereby create the bridge between today's gasoline-powered ICE's and tomorrow's hydrogen-powered fuel cell vehicles.

Other advantages of the Hydrogen ICE's are that:

BMW has published papers showing impressive technical advances from hydrogen-fueled engines and that the theoretical efficiency of direct-injected hydrogen engines is above 60% — about the same as a fuel cell.