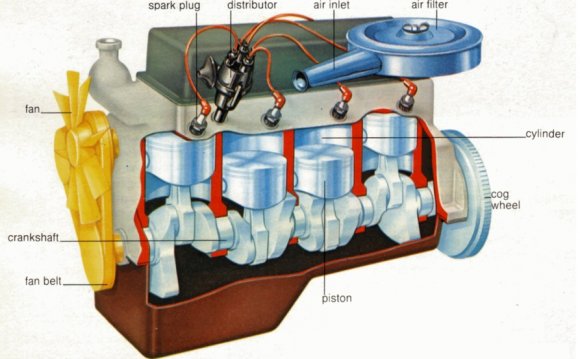 Brought to you by comments to [email protected]

Heat engines are sometimes referred to as being motors. Actually, a motor converts one form of energy into useful work without the intentional production of heat, such as an electric motor. A device which burns fuel creating heat to perform work is a heat engine. Heat engines can be classified as external combustion, such as steam boiler, or internal combustion (IC). They can further be divided into the spark ignited (SI) engine or the compression ignited engine (CI). The particular heat engine we are interested about with this webpage, is the Compression Ignited heat engine. This style of engine has been most famously referred to as the Diesel engine, named after it’s inventor, Rudolph Diesel.

The compression ignited internal combustion engine has two main designs: the four stroke cycle, and the two stroke cycle engine. They are both very common throughout the world because of their high efficiency - compare with other types of heat engines. They burn a wide variety of hydrocarbon fuel, which is still common. Heavy fuel oil, intermediate fuel oil and marine diesel oil are the most common hydrocarbon fuel. The two stroke and four stroke titles refers to the mechanical action of the machinery, in particular the piston within the cylinder, to achieve the theoretical Carnot heat cycle, as define by the laws of thermodynamics.

Diesel engines are furthermore sub-divided into three categories: slow, medium and high speed. Slow speed are considered to be up to 300 rpm such as most big two stroke engines commonly found on ships. Medium speed engines dwell in the 300 - 900 rpm range. They are most common on smaller ships and power plants driving electrical generators and / or the propeller. High speed engines are the most common. Their high revolutions are ideal for driving vehicles such as busses and yachts. All Diesel trucks and vehicles on our roads use this class of Diesels, having an rpm over 900.

The four stroke is most commonly seen in application demanding a compact power plant. Ships need a large amount of power to propel it through the water, this is why the bigger ship, as previously mentioned, generally have a two stroke power plant. As illustrated by the pictures on this website, a person can begin to appreciate the physical size of these plants, especially the engine’s height. This height becomes a problem on many coastal ships, such ferries.

Take the British Columbia Ferry Corporation (BC Ferries) MV Queen of Cowichan, a double ender with a GT of 6, 551 tons. This ferry, as do most ferry rely, on their ability to load and discharge a large amount of cars, transported on continuous decks. That creates a problem for the size engine the ferry needs. The power plant needs to fit below the main deck and still be able to go in shallow waters. The engines installed in the Queen of Cowichan are MAK 551 V12. They are a four stroke, turbo charged engine producing around 4, 500 kW each. These engine stand less than twenty feet high and serve to illustrate the ideal application of a four stroke engine. A similar engine is pictured to the right.

Four stroke engines are more complicated than the two stroke and "pack" less horsepower per pound. The two stroke actually produces more power, around 1.8:1. But the four stroke consumes less oil and can operate safely at high speeds. The four stroke Diesel engine is probably the most prevalent engine in all the world. They can be found producing power for oil rigs in the North Atlantic or powering small commuter cars.

The Diesel engine uses a light distillate fuel oil, commonly known as Diesel. This of course, is more expensive than the Heavy Fuel Oil (HFO) which is burned more efficiently by the two stroke engines. Recent engine design development has provided bigger four stroke power plants with the ability to burn HFO. This development now makes the four stroke engine an attractive option to ship owners.