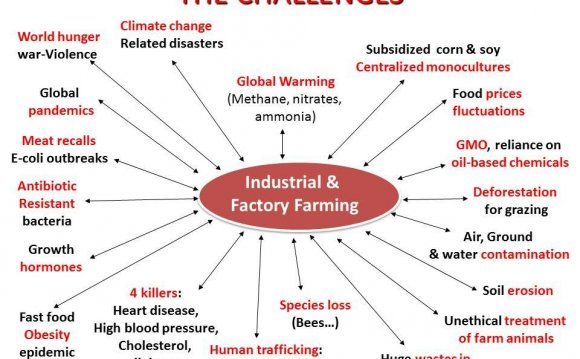 Advocates of industrial farming often claim that without the factory model, not enough food would be produced to feed all of the people in the world. “Bigger is Better” is always quoted and that factory farming is the most efficient way to produce cheap food for the world. In fact this couldn’t be more untrue.

What these advocates don’t tell consumers, is that the low cost of food does not take into account the true cost of production. Some of these hidden costs include degradation of our water, soil, and air, damage to our health, or any of the impacts that are felt by the communities in which these industrial facitities are located. None of these costs are paid by the owners of factory farms but rather by the people who live in these communities.

No matter what country a factory facility is located, the practices are the same and as a result, it poses the same impacts to the community.

Here are some reports that describe some of the economic impacts caused by industrial meat production:

The Real Economics of Factory Livestock Economic arguments in favor of CAFOs are addressed one by one, exposing shortcomings and outright fallacies. (John Ikerd, September 18, 1999)

Foundations of Sand: Considering the Rationale for Factory Farming Factory Farms have spread across the landscape of the US on a string of claims that have mislead many communities. Learn why the purported benefits of factory farms are full of holes, and the reality that lies beyond the claims. (Dr. William Weida, March 5, 2004)

A Short Analysis Of: Manure Management for Water Quality: Costs to Animal Feeding Operations of Applying Manure Nutrients to Land Weida’s critique of the USDA study on the costs of manure spreading under the new EPA requirements. He explains how it validates CAFO critics’ contention that these operations shift their costs to the surrounding area. (Dr. William Weida, June 25, 2003)

The ILO and Depopulation of Rural Agricultural Areas: Implications for Rural Economies in Canada and the US This paper makes the case that (1) depopulation of rural areas is occurring because of CAFOs and (2) rural agricultural areas are becoming increasingly separated from the communities that reside in those areas. (Dr. William Weida, November 8, 2002)

The Evidence for Property Devaluation Due To The Proximity to CAFOs A major reason that concentrated animal feeding operations (CAFOs) are constructed in a given region is that the area has a reputation for loose environmental regulations and lax enforcement of those regulations. The stricter environmental regulation and enforcement becomes, the more likely that CAFOs will locate elsewhere. (Dr. William Weida, January 21, 2002)

Impact Calculations for a Hog Concentrated Animal Feeding Operation A set of calculations of water usage and land application tailored to the specifics of a proposed operation in Canada. (Dr. William Weida, May 18, 2000)

Concentrated Animal Feeding Operations and the Economics of Efficiency This report provides an explanation of some of the industrial organization issues involved in operating large, corporate hog farms, and an explanation of the two contracts that govern the behavior of corporate hog firms - the business contract and the contract with the community that hosts the firm, and the implications of these issues for the community. The article also examines the question of efficiency of CAFO production - whether large hog farms are more efficient than conventional hog farms. (Dr. William Weida, March 19, 2000)

Economic Implications of Confined Animal Feeding Operations An economic overview of CAFOs, including the effect of diminishing returns, the costs and benefits of CAFO waste, and the impact of these facilities on economic development. (Dr. William Weida, January 5, 2000)

What is a "Factory Farm" or "Mega Farm"?