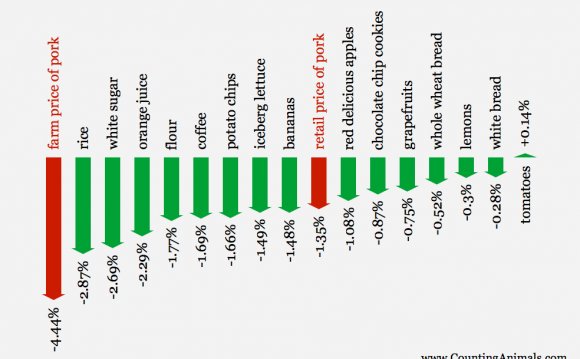 
Factory farming is an industrial process in which animals and the products they generate are mass produced. The animals are not seen as individual, sentient beings with unique physical and psychological needs but as eggs, milk, meat, leather etc. Because factory farming is a business, its goal is to maximize production and, consequently, profit. Since the animals are seen as mere commodities, they are bred, fed, confined, and drugged to lay more eggs, birth more offspring, and die with more meat on their bones.

Farmers cut costs by feeding animals the remains of other animals, keeping them in extremely small and soiled enclosures, and refusing to provide bedding. Because animals live in such a manner and are denied normal social interactions, they experience boredom and stress so great that it leads to unnatural aggression. To curb this aggression, conceal the disease that results from such horrendous living conditions, and stimulate aberrant growth, farmers routinely administer drugs to animals, which in turn reach meat-eating consumers. The consequences of this agribusiness are institutionalized animal cruelty, environmental destruction and resource depletion, and health dangers.

Farmers get more money for chickens with enlarged thighs and breasts. As a result, they breed the animals to be so heavy that their bones cannot support their weight. Consequently, the chickens have difficulty standing, and their legs often break. Like other factory farmed animals, broiler chickens are raised in such overcrowded enclosures that they become aggressive. To stop them from fighting with one another, their beaks and toes are cut off without anesthetic. Some cannot eat after being "debeaked" and starve. They never breathe fresh air but instead inhale ammonia day after day.

Layer chickens lay 90-95% of the eggs sold in the U.S. Newborn chicks are placed on a conveyor belt where a worker picks each one up to see if it is male or female. Newborn males are placed in trash bags and suffocated, decapitated, gassed, crushed, or ground up alive. Newborn females are placed back on the belt. The next worker then picks up the female chick, holds her up to a machine's hot iron which cuts off her beak, and then places her back on the belt. The beaks of these birds are removed because five to eight of them are crammed into 14 square inch cages, cages so small that the birds cannot even spread their wings. Such close confinement, which averts their natural social order, causes aggression among the birds. Debeaking prevents them from harming one another, which would make their corpses less profitable to the farmers. It is a painful practice that involves slicing through bone, cartilage, and soft tissue.

The floors of layer hens' "battery cages" are made of extremely uncomfortable wire, which chafes their skin, rips out some of their feathers, bruises their bodies, and deforms their feet. The cage floor slopes at the bottom, so weaker hens are often crushed on the cage base. Layer hens' bones are so brittle that they often shatter during handling. Approximately one in five die of stress and disease. Others are ground up and turned into animal feed on site.

Parkhurst investigation - chicken farmLayer hens are exposed to light constantly so that they will lay more eggs. At the end of their laying cycle, they are killed or subjected to "forced molting, " a process that entails withholding food and water for up to 18 days and keeping them in darkness so that their bodies are shocked into another laying cycle. Many of the birds who undergo forced molting die from fatigue.

Cruelty in duck farms in Germany revealed by Animal Equality