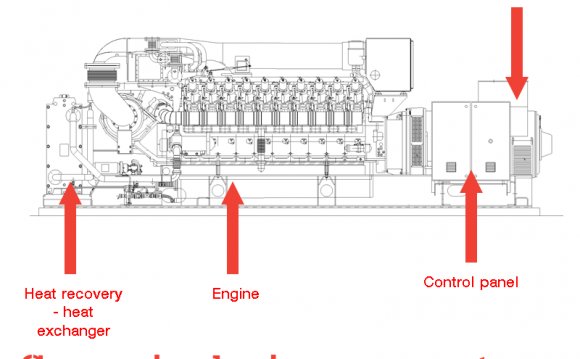 As crude oil gets more expensive, research for engines that can use fuel made from biomass is on going. Some of these fuels are being made or collected today. Producer gas [other names or other similar fuels: town gas, coal gas, hygas, manufactured gas, syngas, SNG, woodgas, holzgas, air gas] (approximate molar analysis ~ 20% H2, 20% CO, 2% CH4, 42% N2, 8% CO2, 8% H20) is made from coal, wood or other organic materials in gasifiers.

Biogas is formed in anaerobic digesters where microscopic organisms in the absence of air act on starches and other organic compounds to produce methane and carbon dioxide (approximate molar analysis 60% CH4, 30% CO2, 10% N2).

The proposed stationary engine would burn one of these gases and would mechanically be much like the "Dual Pressure Intake Engine". But it would take advantage of the fuel's storage pressure to boost the engines power output.

Such an engine could supply mechanical power for a farm or rural business. More likely it would power a generator to produce electricity for onsite needs and/or supply peak power to the electric grid (power which sometimes can be sold at a premium). It seems more sensible to use the biogas (or producer gas) to make valuable electricity in this fashion, especially if one can use the waste heat (CHP), rather than selling the raw gas cheaply to someone that needs to transport and then refine these gases to meet the standards for gaseous fuels.

The below diagram and animation describe the operation of this 'Green' engine.


In the animation to the right the:

Using an induction system similar to the Dual Pressure Intake Engine but with the fuel and air in separate intake runners, one can boost the volumetric efficiency of an engine running on Producer gas by about 83%. In an engine running on biogas that is 50 percent methane then its boost would be about 20%. Neither of these engines would require a supercharger or turbocharger since the boost would be provided by the storage pressure of the fuel.
This would be accomplished by first filling the cylinder withambient pressure air and then allowing the producer gas or biogas to top the cylinder to a boosted pressure. The amount of boost would be limited by the stoichiometric balance of the fuel. Boosting volumetric efficiency by taking advantage of the pressurized fuel is important since both biogas and producer gas have a low heat content compared to Natural Gas, for example.
Also, the kinetic energy of the fuel/air mix will be high due to the large pressure differential between the induced air (~ 1 atm) and the fuel's storage pressure (4-10 atm). This should help the charge burn quicker and more efficiently. {revised Oct. 17, 2009}