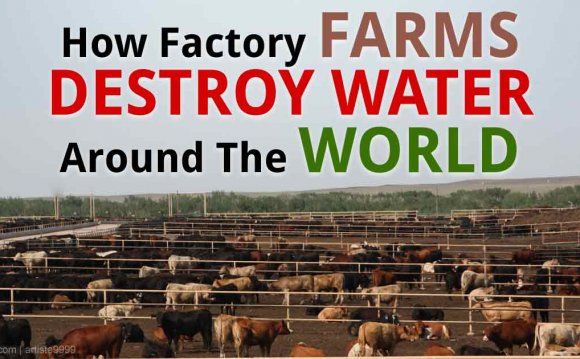 You probably already know that the giant factory farms on which the majority of American livestock are condemned to live out their miserable lives aren’t exactly paradise for the animals—and you’re also likely aware that the enormous amount of waste these industrial-scale operations generate can contaminate local water supplies. But that factory farms emit such a staggering amount of pollution to make the air in some rural communities more dangerous than in America’s most polluted cities? That may come as news. And the Environmental Protection Agency has done virtually nothing to stop it.

Now the EPA is being forced to answer in court for its inaction. Two lawsuits filed Thursday by a coalition of groups—including the Environmental Integrity Project and the Humane Society of the United States, as well as a number of grassroots organizations—contend that the agency has shirked its duty by ignoring petitions filed as long as six years ago that called on it to regulate air pollution from factory farms.

“Animal factories subject millions of animals and farm workers to highly toxic levels of air pollution on the farm, and also release huge amounts of these toxins into the environment, ” Jonathan Lovvorn, a lawyer with the Humane Society, said in a statement. “EPA’s failure to address these impacts should be alarming to anyone that cares about animal welfare, worker safety, human health, environmental protection or the preservation of rural communities.”

Lovvorn’s choice of the words “animal factories” rather than “factory farms” is telling. Even as they’ve come to dominate the American farmscape, with an estimated 20, 000 now housing billions of chickens, hogs, and other animals, the public—or Washington, at least—has chosen to focus on the “farm” half of the oxymoronic nomenclature. By holding onto an association with the red barn and the open pasture, the term integrates these outsize operations seamlessly into our collective romanticized notion of bucolic rural America. But for those Americans who have to live next door to them, the emphasis decidedly shifts to the “factory” part of the equation. “When the emissions are at their worst, we have had to leave our home for days at a time, ” says Rosie Partridge, whose family farm in Iowa is surrounded by more than 30, 000 hogs within four miles. “The ammonia and hydrogen sulfide are so strong that my husband has trouble breathing.”

Indeed, a 2011 analysis by the Environmental Integrity Project of data collected during an EPA study (one funded by the livestock industry, no less) found a majority of factory farms surveyed releasing more than 100 pounds of ammonia on an average day, which in any other industry would trigger pollution reporting requirements. Some factory farms “emitted thousands of pounds on their worst days.”

That’s not all. Fine particle pollution, which can cause respiratory and heart disease, also exceeded federal limits at a number of sites, while levels of hydrogen sulfide released by some large hog and dairy operations were comparable to those emitted by oil refineries. Factory farms have also been shown to be major sources of methane and nitrous oxide, both of which are potent greenhouse gases. Just last week, a new study showed that both antibiotics and drug-resistant bacteria are also blowing in the foul wind.

“EPA has acknowledged the harmful impacts of factory farm air pollution for over a decade yet is still failing to act on the problem, ” Tarah Heinzen, an attorney for the Environmental Integrity Project, said in a statement.

The foot-dragging can no doubt be traced to the powerful agriculture lobby in Washington, which in 2008 managed to convince the Bush administration to exempt factory farms from most pollution reporting requirements, even as the amount of waste generated by these operations has swelled to more than 300 million tons a year—three times the amount of waste produced by people.

“Factory farm air pollution harms public health, the environment and rural quality of life, ” Heinzen says. “Yet EPA is looking the other way while citizen pleas for action collect dust on the agency’s shelf.”

Chinese village raided for tons of meth in farm factory ...